Home Cats Kitten with Big Paws Decides to Cling to Woman Who Gave Him...

A kitten with big paws decided to cling to the woman who gave him a home, and follow her cats around the house. 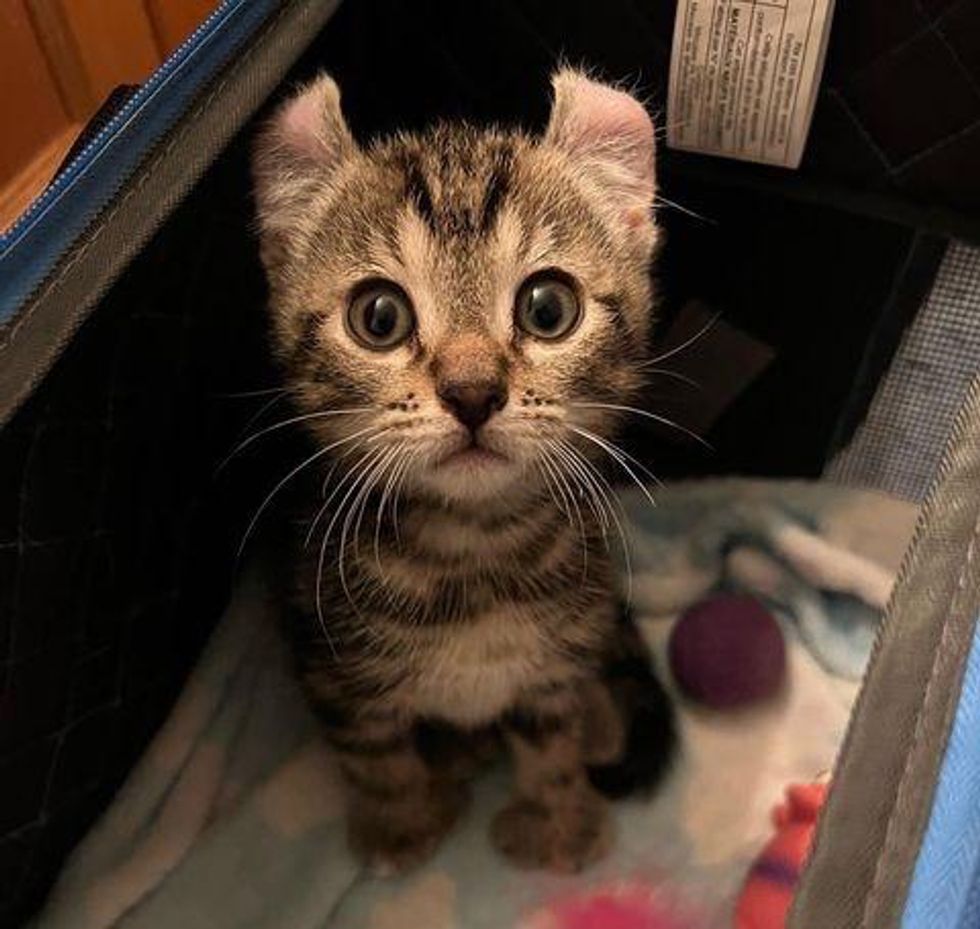 Last month, Tara (@mickeythemanxkitty) was picking up some patio stones when a man told her about his neighbor whose cats needed new homes. “His neighbor had kittens that she was trying to get rid of, as they were moving and could only take one cat,” Tara shared with Love Meow.

Tara who has rescued and adopted several cats and dogs, went to visit the family and noticed one of the kittens was a polydactyl with curly ears. She went home to drop off the stones, but couldn’t stop thinking about them.

“I figured this was a meant-to-be situation. How else would this happen? So I went back.” 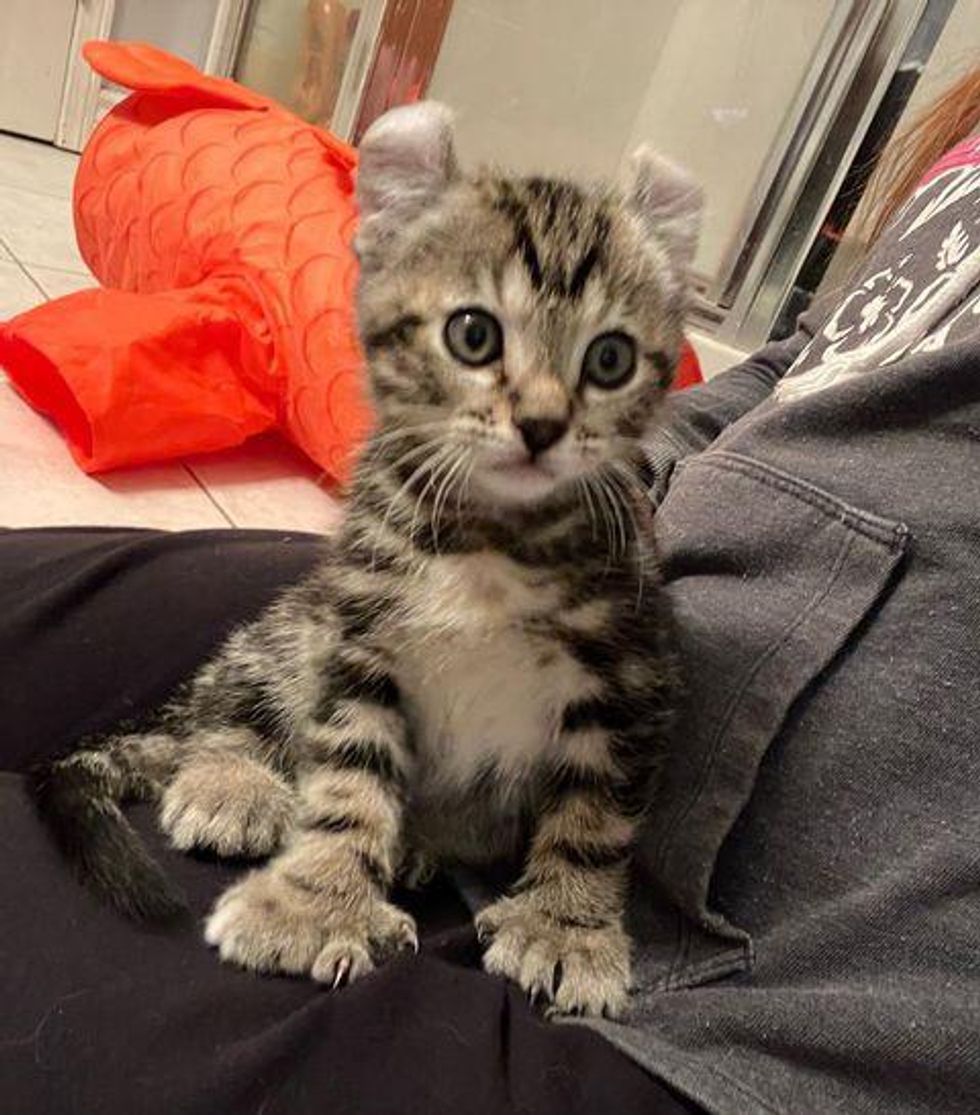 She has extra toes and curly earsTara

By the time she returned, the kitten with many extra toes was the only one that still needed a home—the others had been adopted. “The man I got the stones from, was afraid the neighbor might just let him go, so I told her I’d take the baby.”

The kitten, named Max, was nine weeks old and eager to be loved. “When he came home he was an instant cuddle-bug, purring and very vocal.” 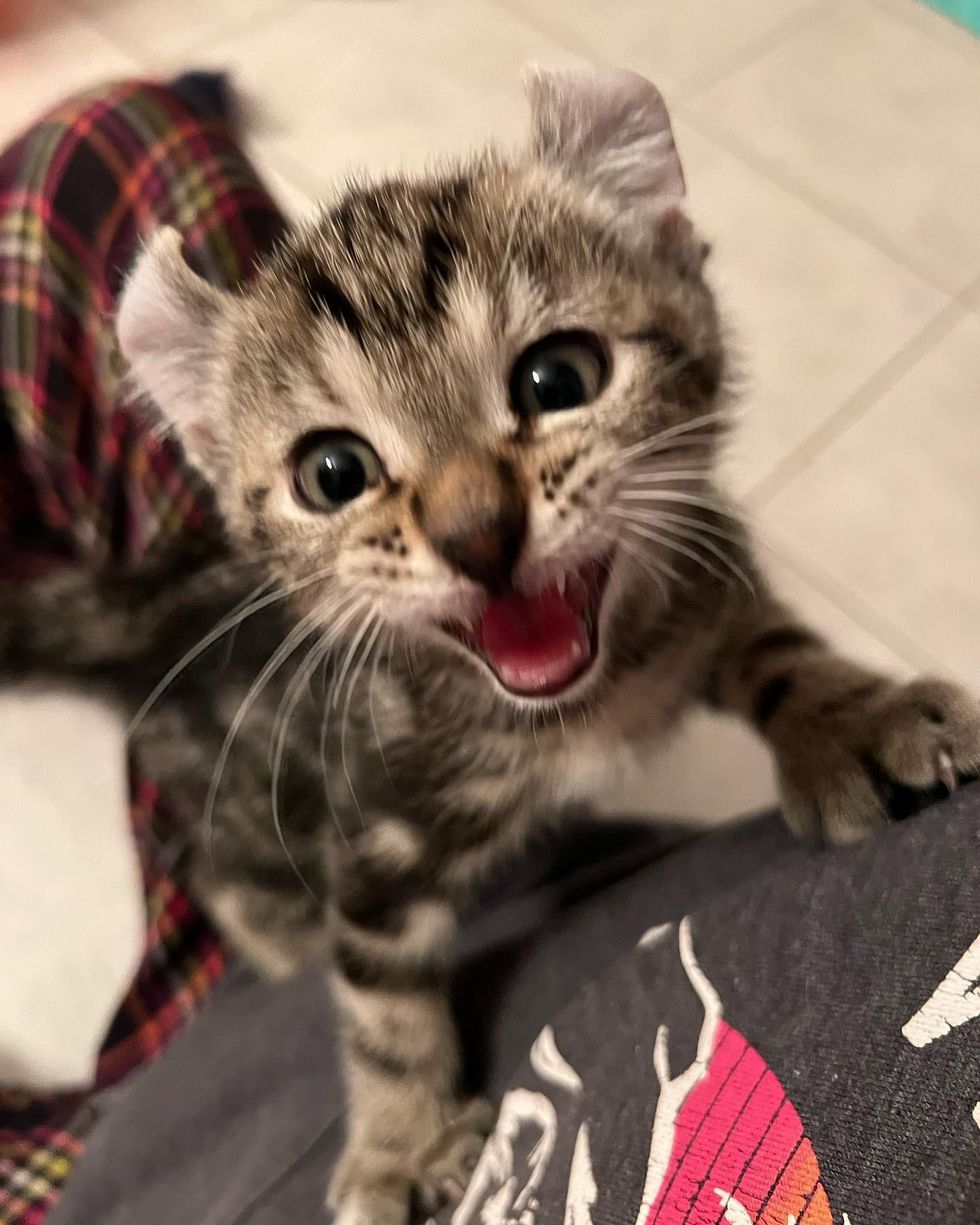 She was an instant cuddle-bug and eager for attentionTara

As soon as Max settled into his new digs, he would run up to his human for snuggles. He quickly learned to command attention by crawling onto Tara’s lap, chest or climbing up her leg.

In no time, Max’s meows and the commotion from his zoomies piqued the interest of other furry residents, including Surry the gentle rescue pup, Mira the sweet wobbly tortie, and Mickey the fearless scooter cat. 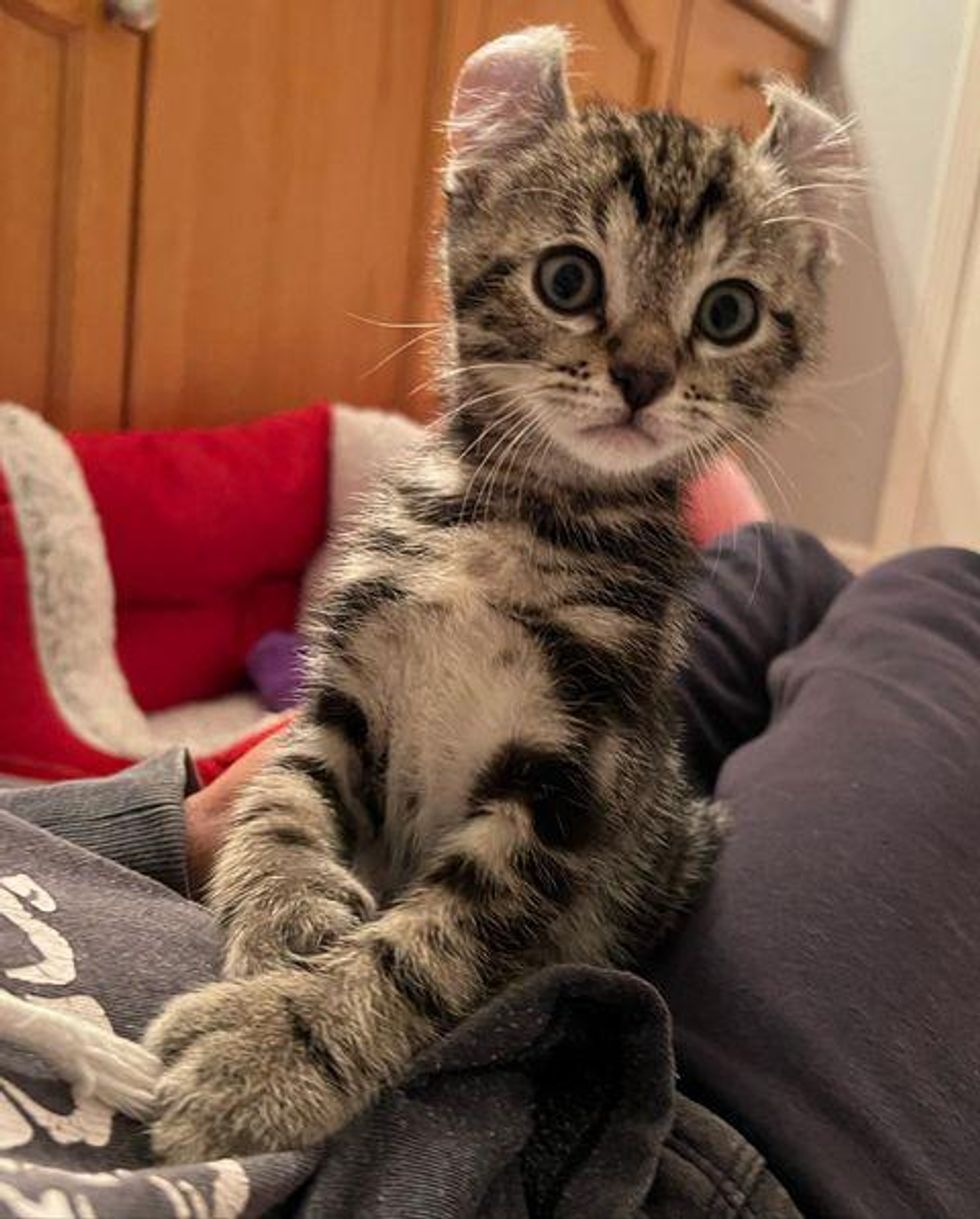 “I introduced him to Mickey (who has Manx Syndrome) the following day, and they hit it off instantly. They are constantly playing and wrestling. Max never stops and I don’t think Mickey can believe he was ever like that,” Tara told Love Meow.

“When Max finally tires himself out, they end up becoming cuddle buddies.” 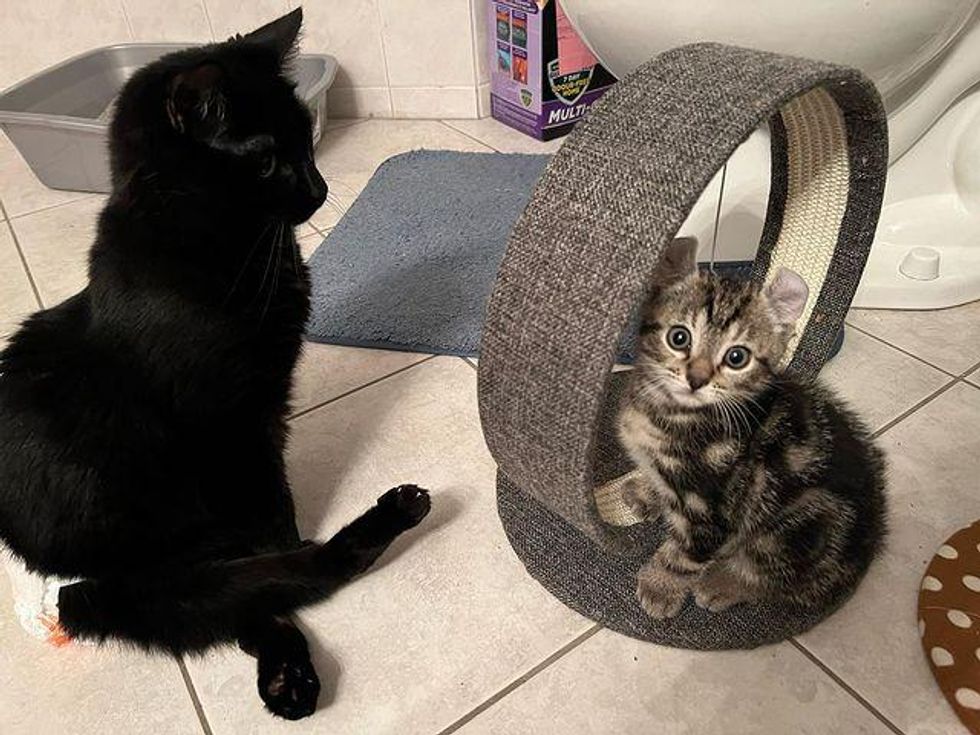 When Max came home from his first vet visit, he was a bit overwhelmed from the trip. Mickey seemed to know just what he needed and scooted over to offer some TLC.

Watch Max the kitten in this cute video:

“I found them curled up together with Mickey cleaning him all over, and Max just sleeping over him. It was the cutest sight.” 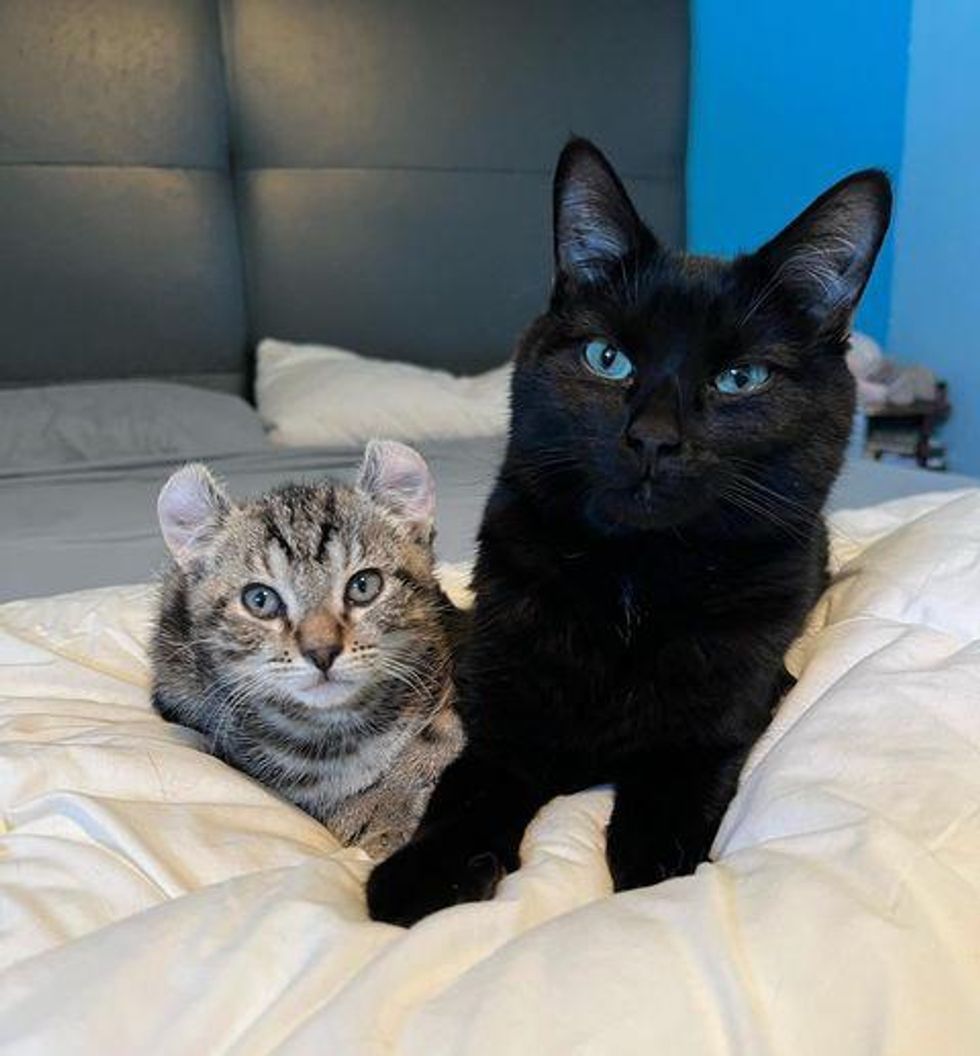 Max was determined to befriend everyone in the house at his own pace. Before they knew it, he climbed over the kitty playpen to hang out with Surry the dog. The nurturing canine tolerated every antic from the feisty kitty and just wanted to dote on him with licks.

“He is an absolute love-bug, and instantly fell in love with my special girl Mira (the sweet wobbly cat) as well, and she him.” 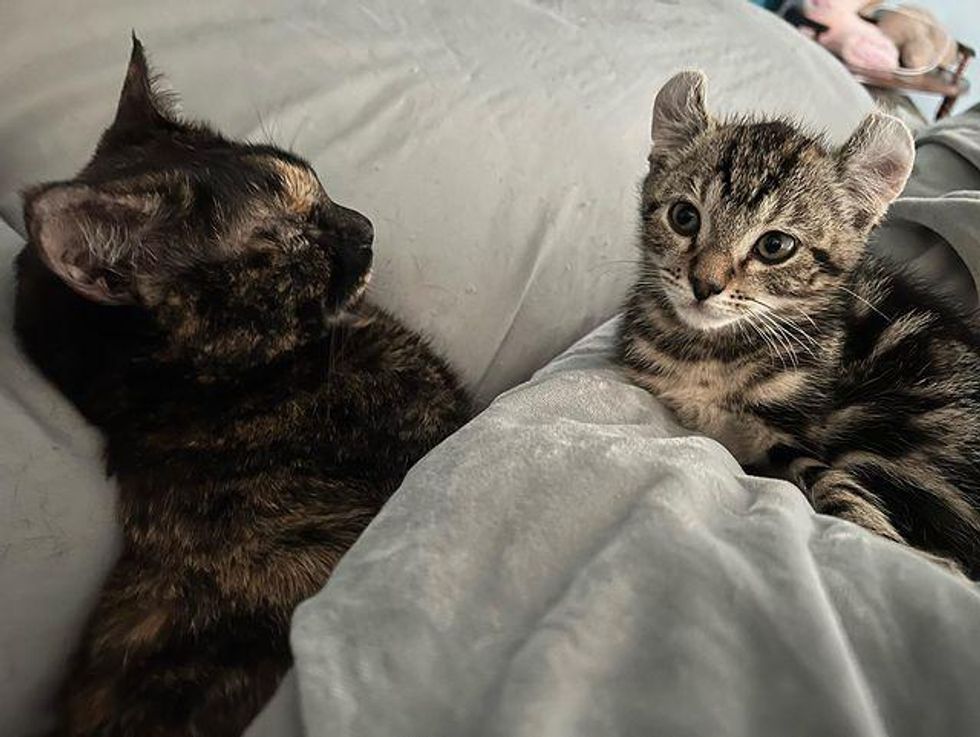 “Max has been slowly meeting everyone in the house, and much like Mickey was, he gets right in their faces with no fear. I think Mickey taught him that, and that he can do anything he puts his mind to.”

Mickey has taken on the role of big brother. He shows Max the ropes, shares his toys with him and puts up with all his sneak attacks. 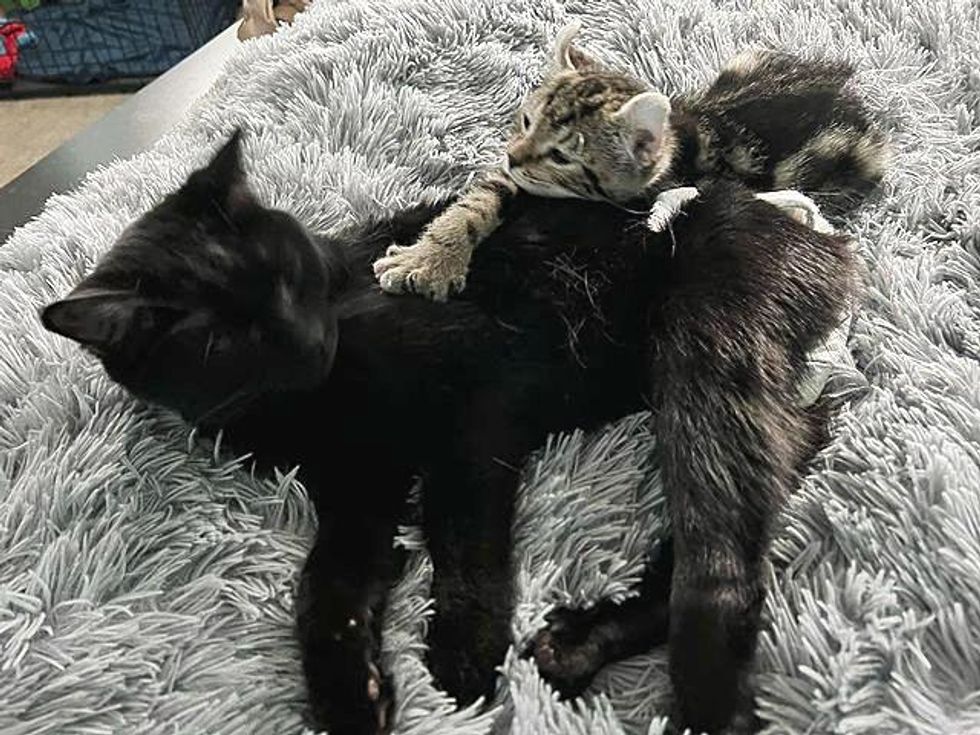 He looks up to Mickey and follows in his paw-stepsTara

“It’s been almost three weeks since I brought him home, and he is such a fantastic addition to the family. To think he could’ve been put out on the street. It scares me. But it can be prevented by spaying and neutering our pets.” 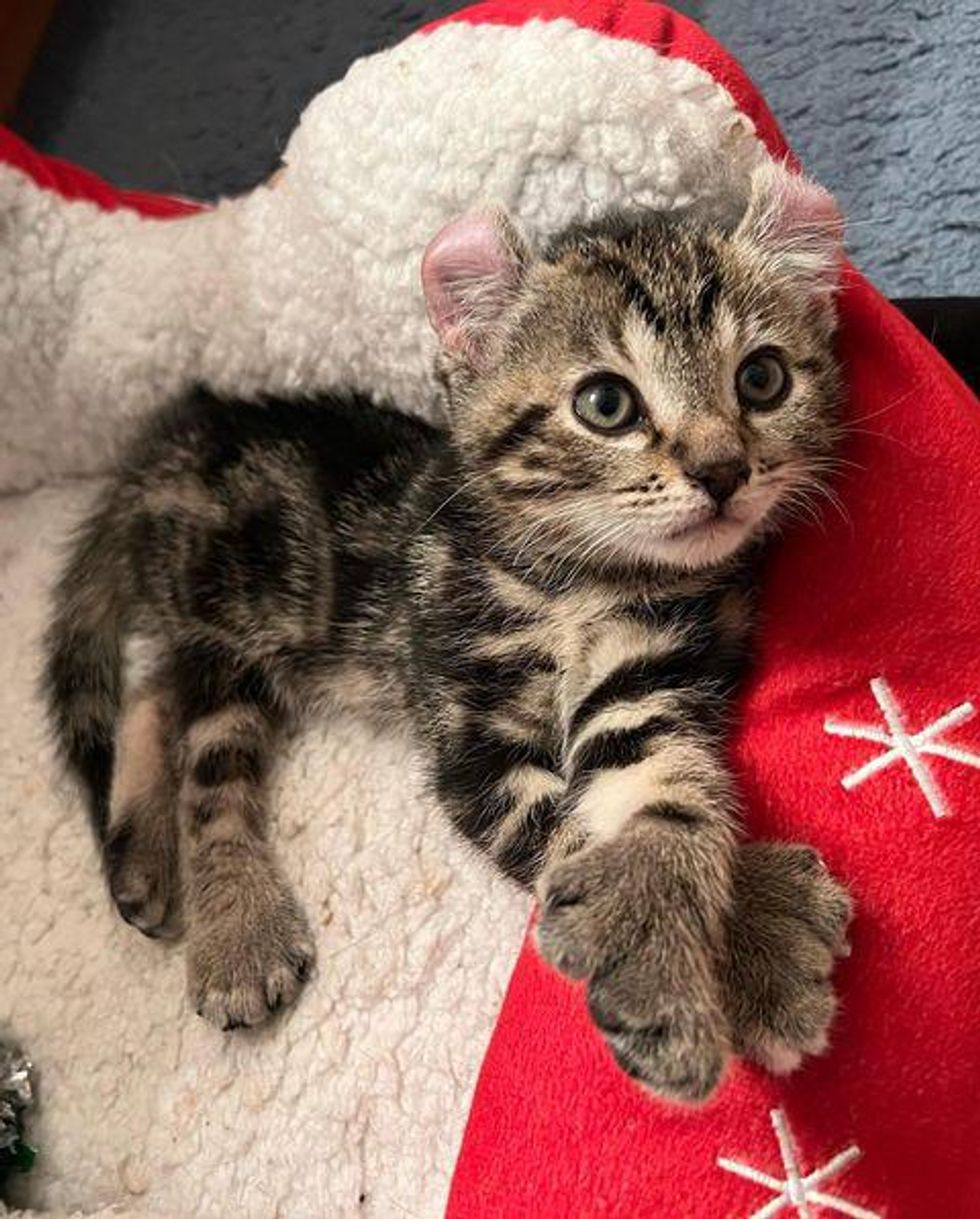 The kitty with big mittens is living like a king at his forever home. He gets attention on demand from his humans, and has many furry siblings to play and nap with, at all times. 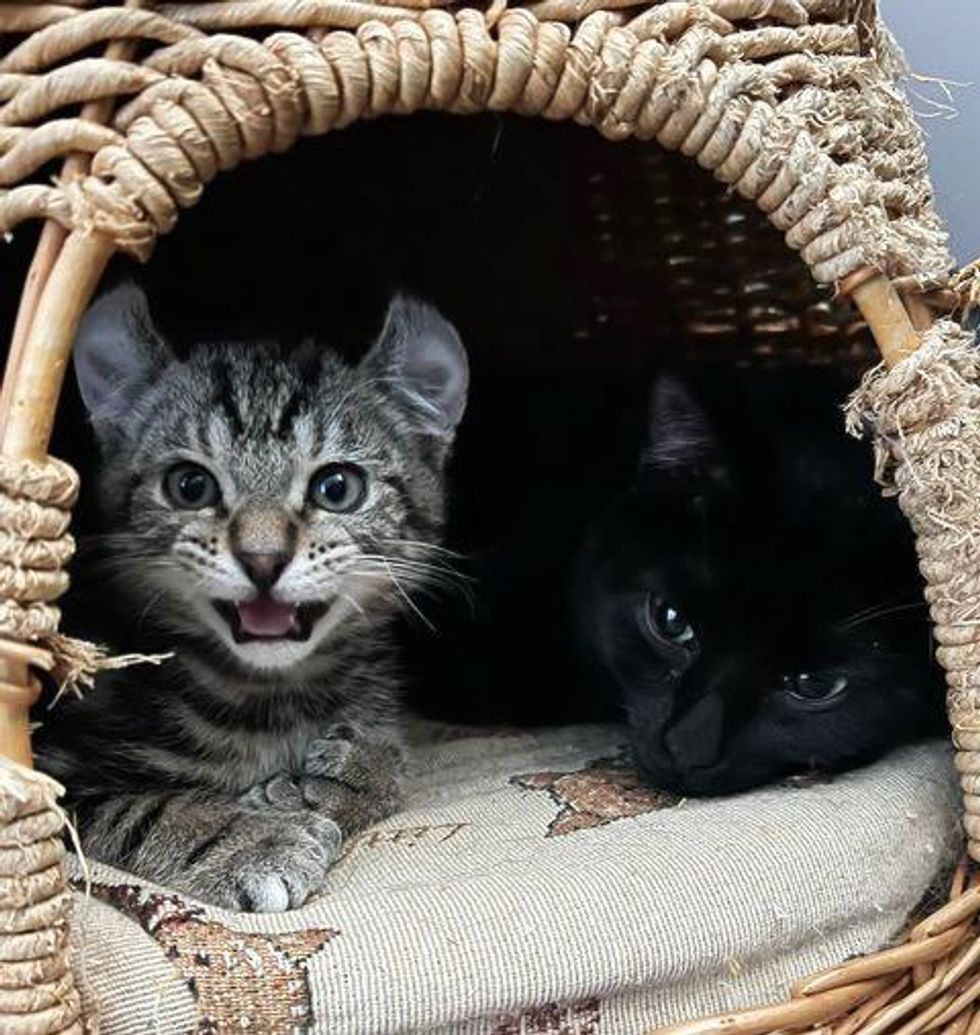 Related story: Kitten with 3 Paws Perseveres and Lives Everyday to Fullest After Being Found Near Dumpster