Home Cats Kitten Spotted Meowing in a Front Yard is Accepted by Other Kittens...

A kitten who was spotted meowing in a front yard, is accepted by other kittens and a nurturing dog. 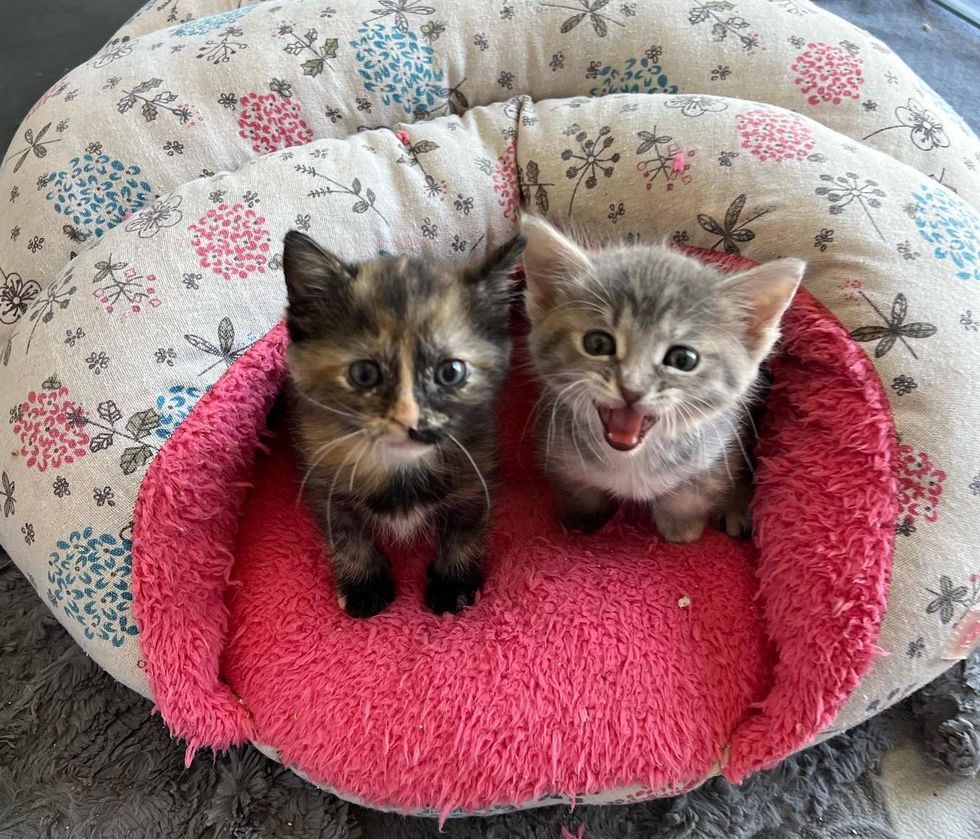 A Good Samaritan from Arizona discovered a litter of kittens left behind in his front yard. Only one of them, a tiny tortie, pulled through, and her meowing led him to her whereabouts.

“He did an awesome job as keeping a newborn kitten alive overnight isn’t an easy feat.” 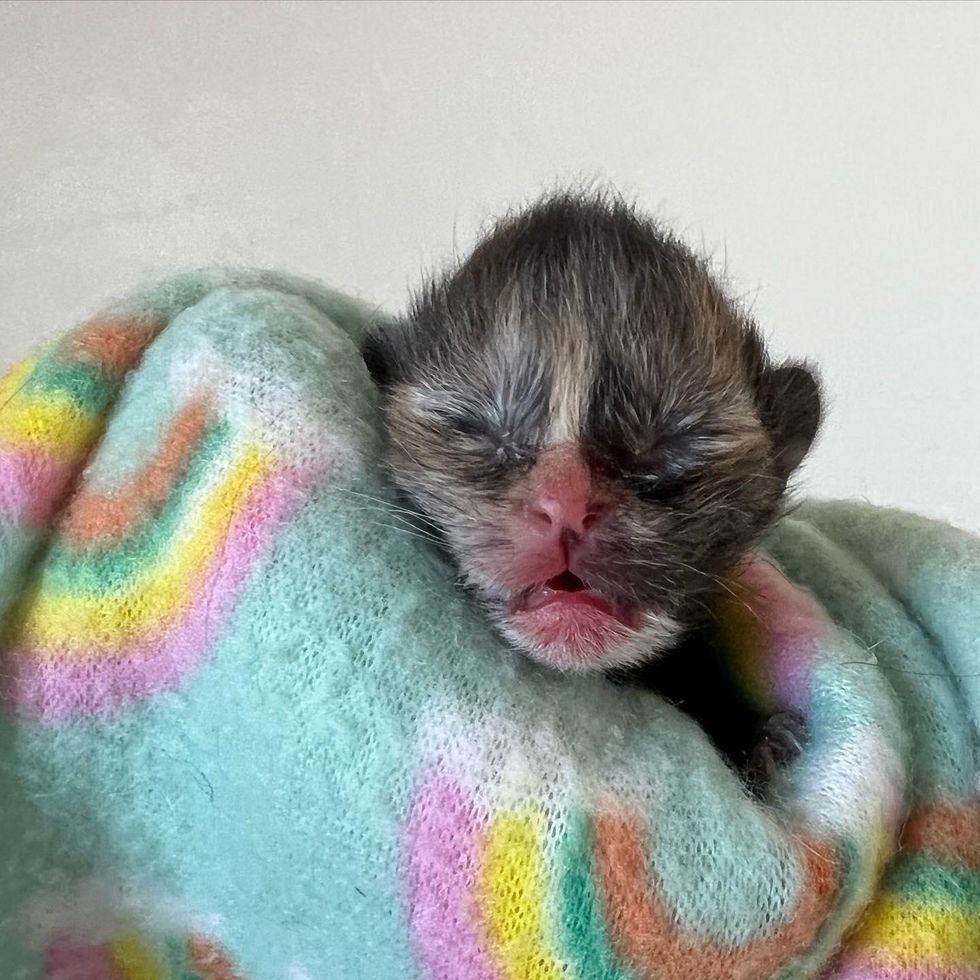 Mrs. Norris was found in a yard meowing for helpJin’s Bottle Babies Rescue

The palm-sized kitten, named Mrs. Norris, showed an incredible will to live. “She was between 24 and 36 hours old, already eating and purring like a dream.”

It quickly became evident that the little tortie didn’t receive any milk from the cat mother (also known as colostrum, an important immune builder for newborns). The kitten began to show signs of an infection and gut issues. 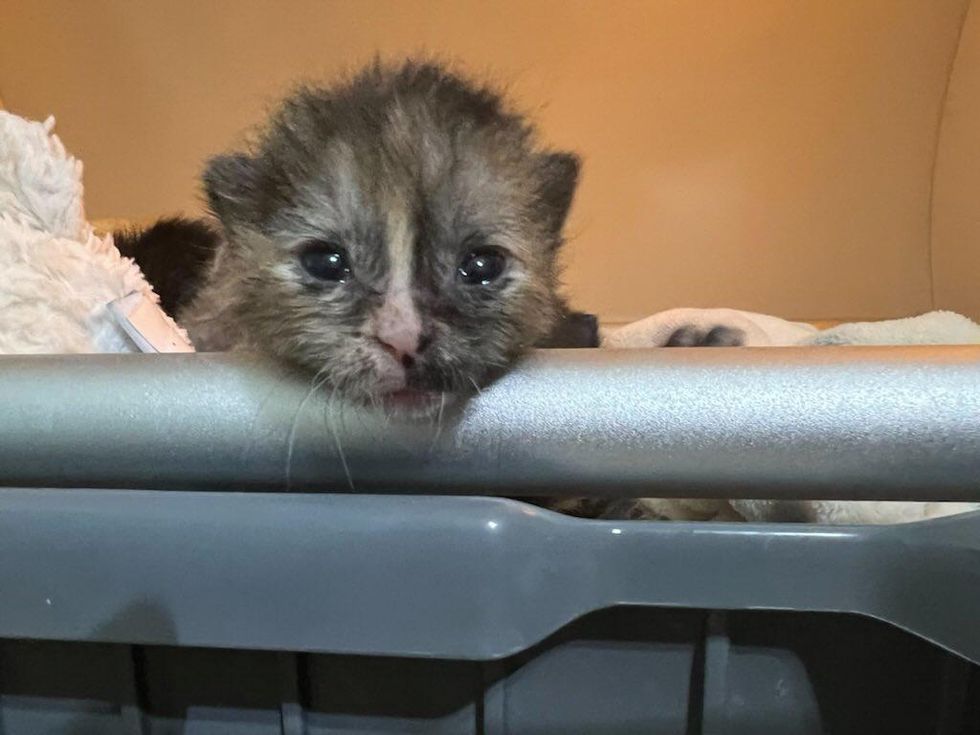 Despite it all, Mrs. Norris forged on and ate to her heart’s content. She used every ounce of her strength to try to get big and strong and never wasted a drop of kitten formula. With supportive care and plenty of TLC, the kitten continued to defy the odds against her.

“She was on medication for her gut health, and she wasn’t fazed at all. I can tell already she is going to grow into a true tortie with torttitude.” 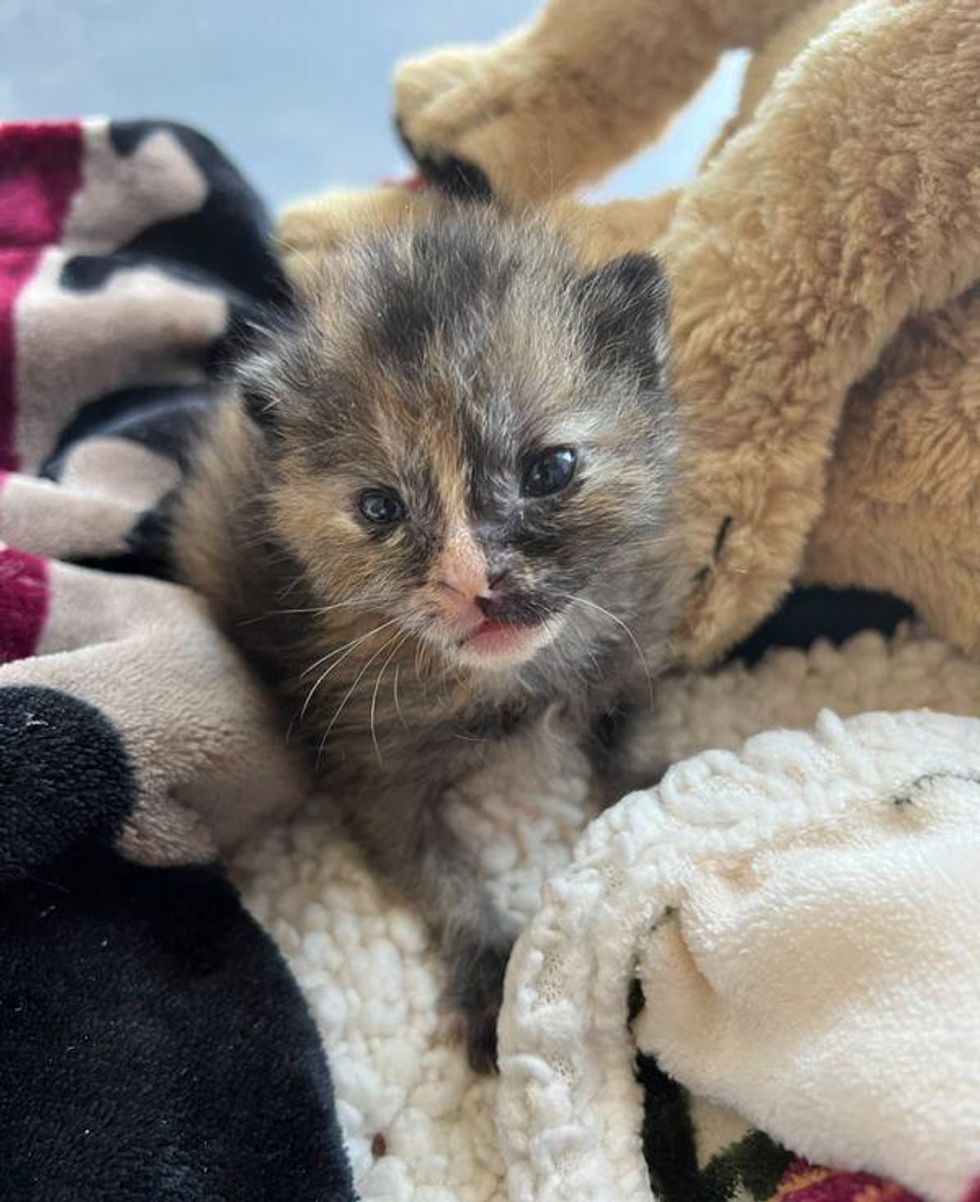 Around that time, the rescue took in a few orphaned kittens that needed bottle feedings. They were about the same age as Mrs. Norris. The rescue decided to place the little singleton with them, so she would always have friends.

In no time, the tortie was fully accepted by her new feline siblings. “She was super happy when we introduced her to the kittens. They all lay together in the cutest cuddle-puddle.” 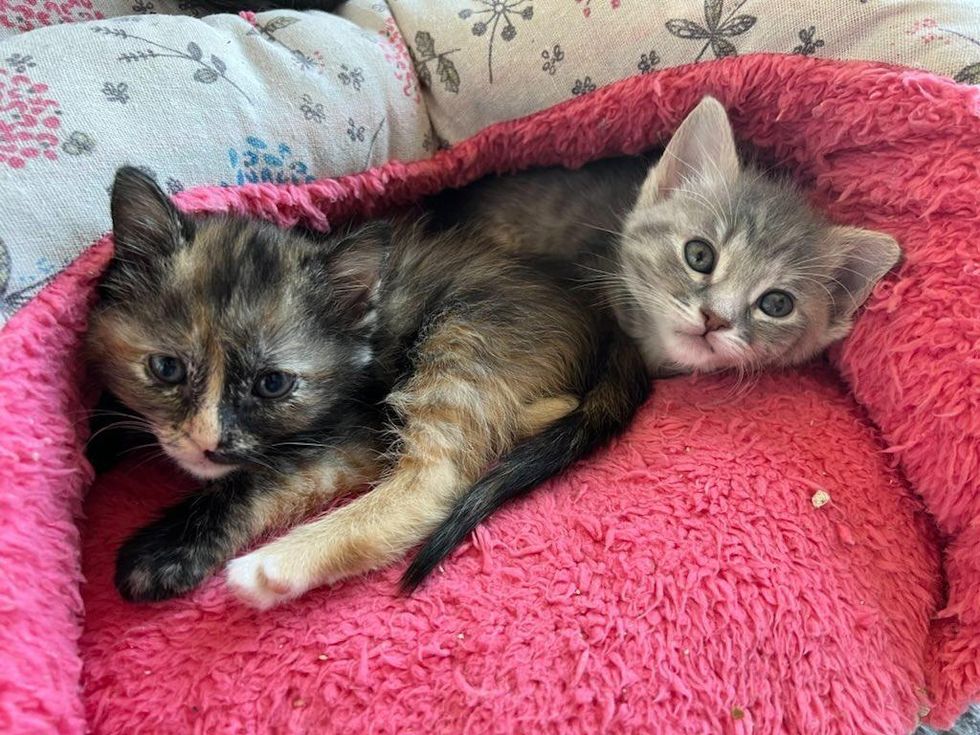 A week later, Mrs. Norris started to open her eyes to see for the first time. She was curious about her surroundings and insisted on getting her bottle first at meal time.

Watch Mrs. Norris the kitten and her journey in this cute video:

Mrs. Norris and her patchwork family continued to thrive together, as they received round-the-clock care and extra attention from a canine friend. 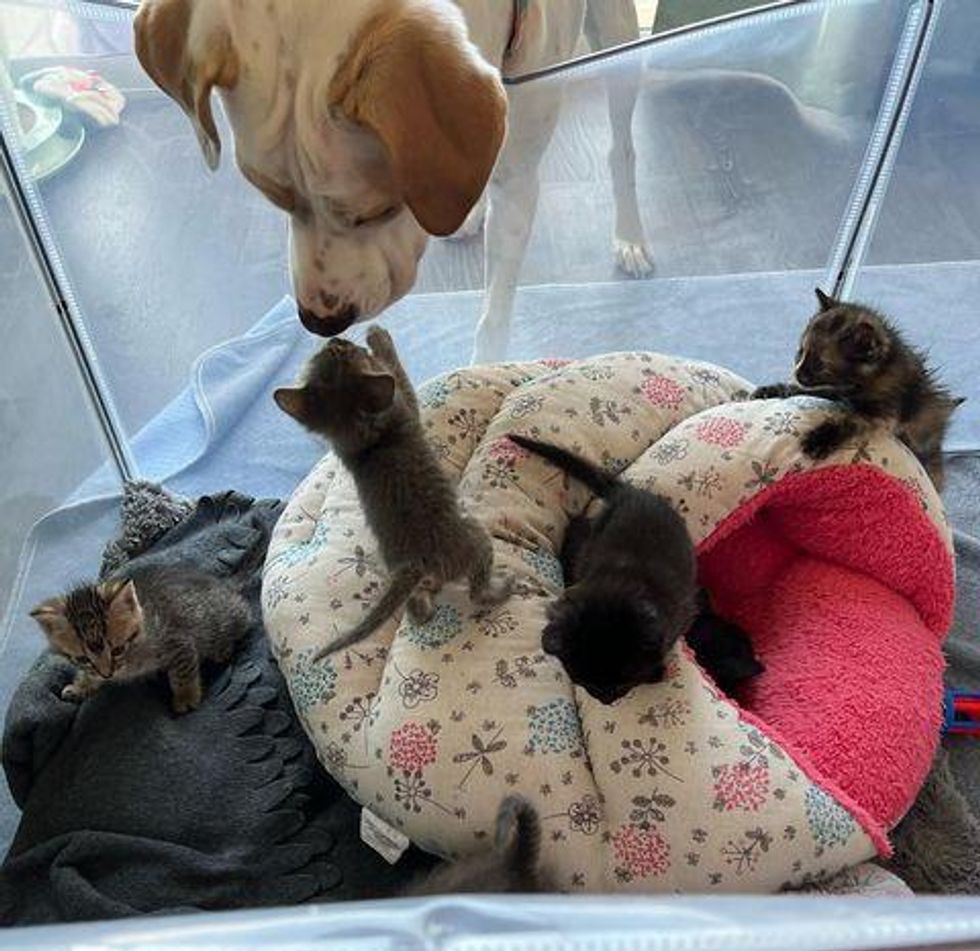 When the kittens were big enough to be upgraded to a playpen in the foster room, they had a meet-and-greet with Ava. It was love at first sight for Mrs. Norris.

“She is obsessed with my dog and is always pawing at the panels when Ava is around to be with her,” Shelbi shared with Love Meow. 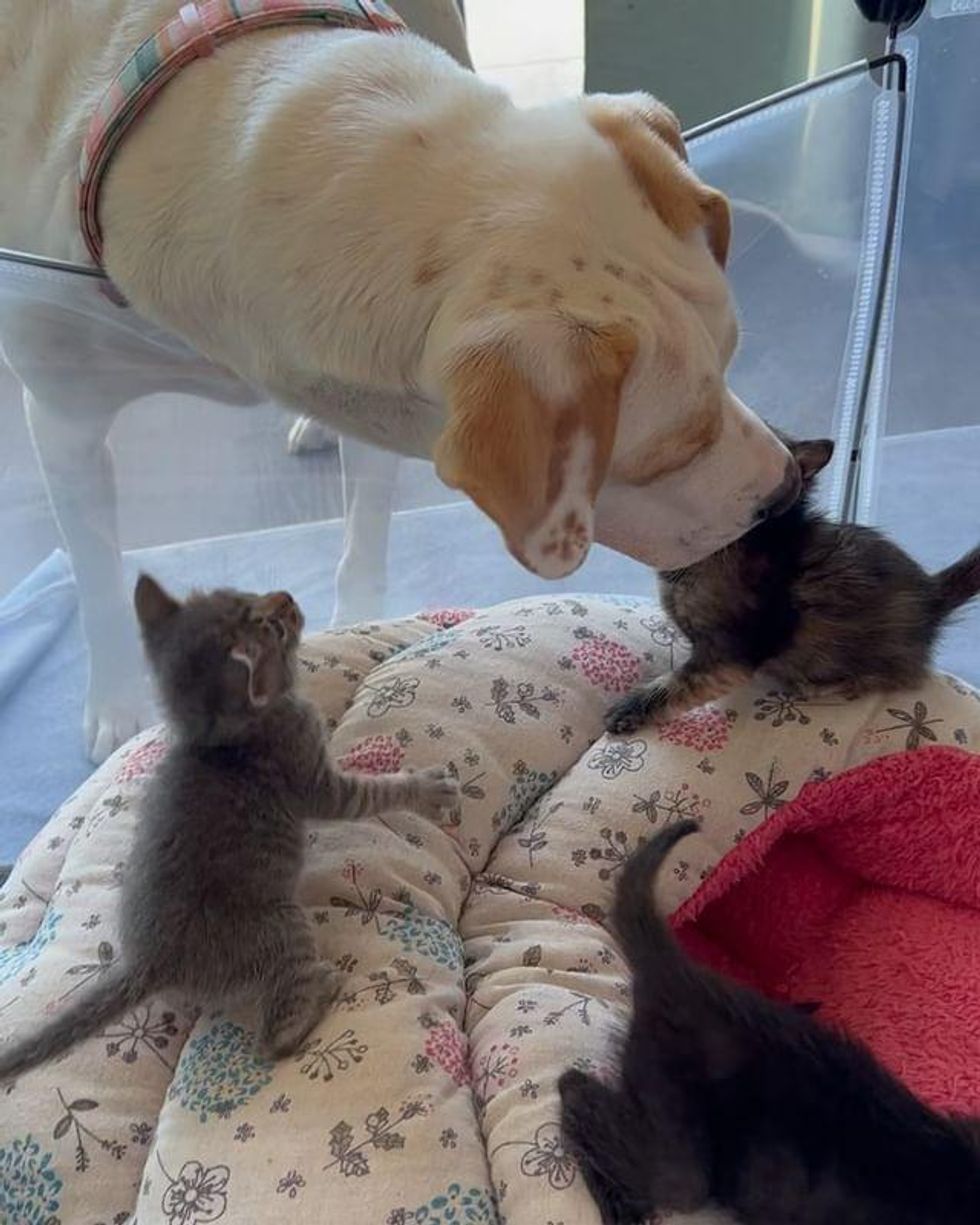 “Ava often ‘works’ after hours to make sure her foster kittens settle into their new space okay.”

The nurturing canine likes to hang out by the playpen and watches over the kittens as their second foster mom. If the kittens need her attention, she is more than happy to shower them with licks and nuzzle their faces with kisses. 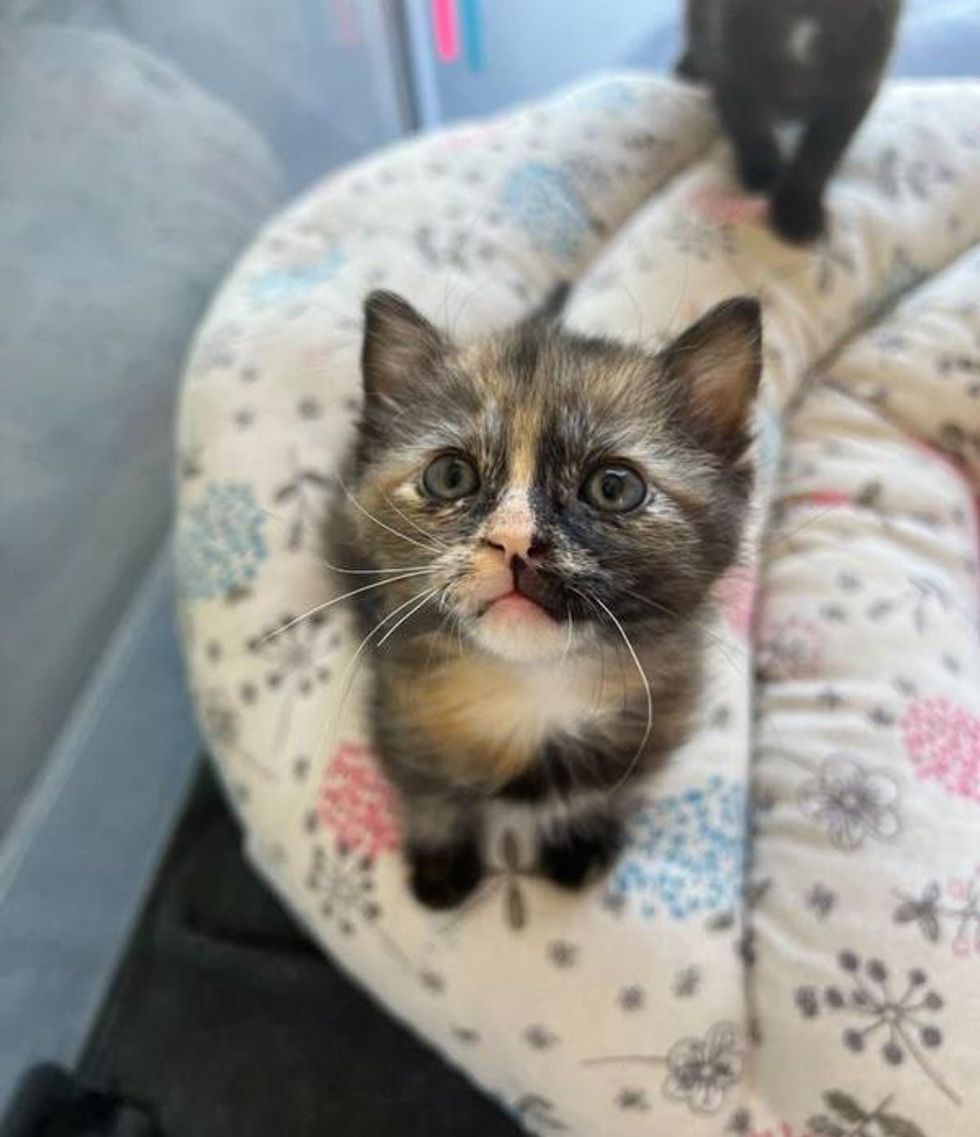 Mrs. Norris is especially fond of her giant gentle friend, and demands her affection whenever she has a chance.

After a rough start to life, Mrs. Norris has blossomed into a healthy, playful, adorable young tortie. She has an endearing, quirky personality that never fails to put a smile on people’s faces. 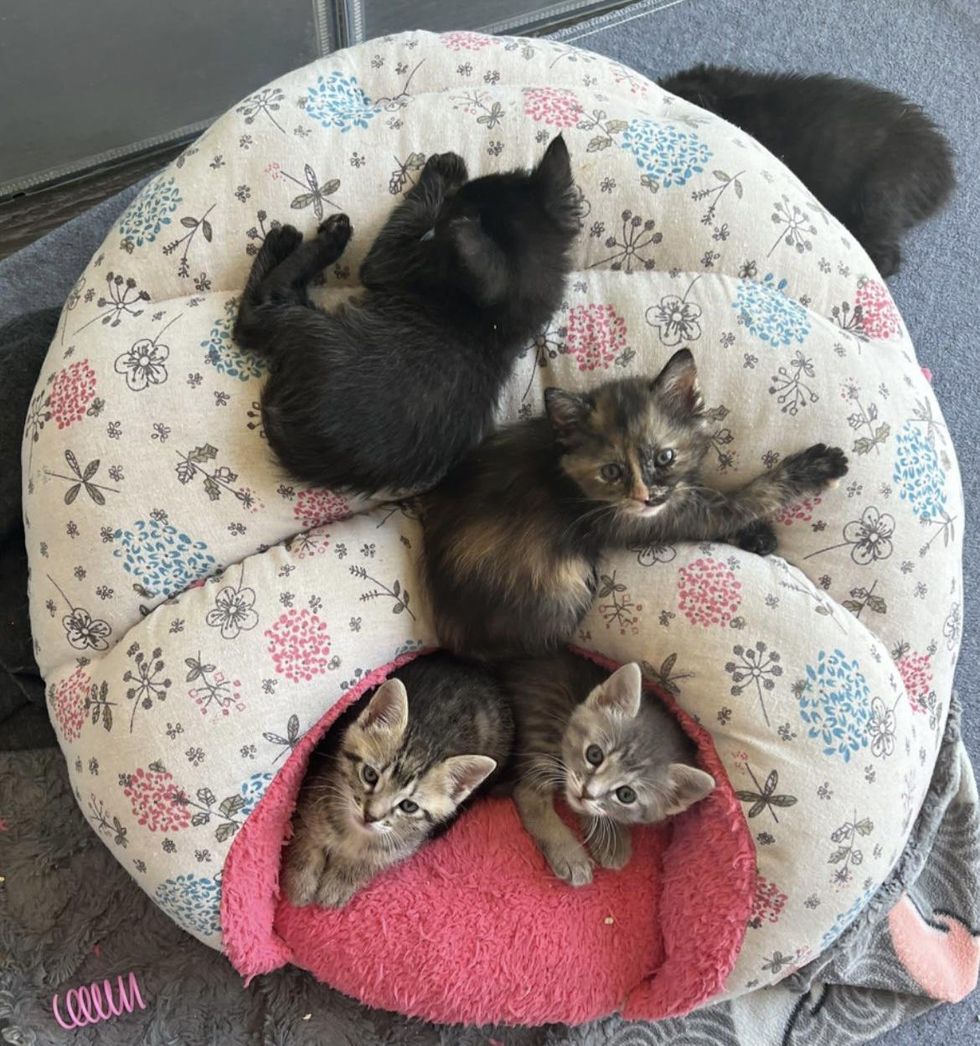 She is so happy to have grown up with other kittens and never felt alone despite her sad beginning. Ava, the canine foster mom, loves all her foster kids and has a soft spot for baby Mrs. Norris. 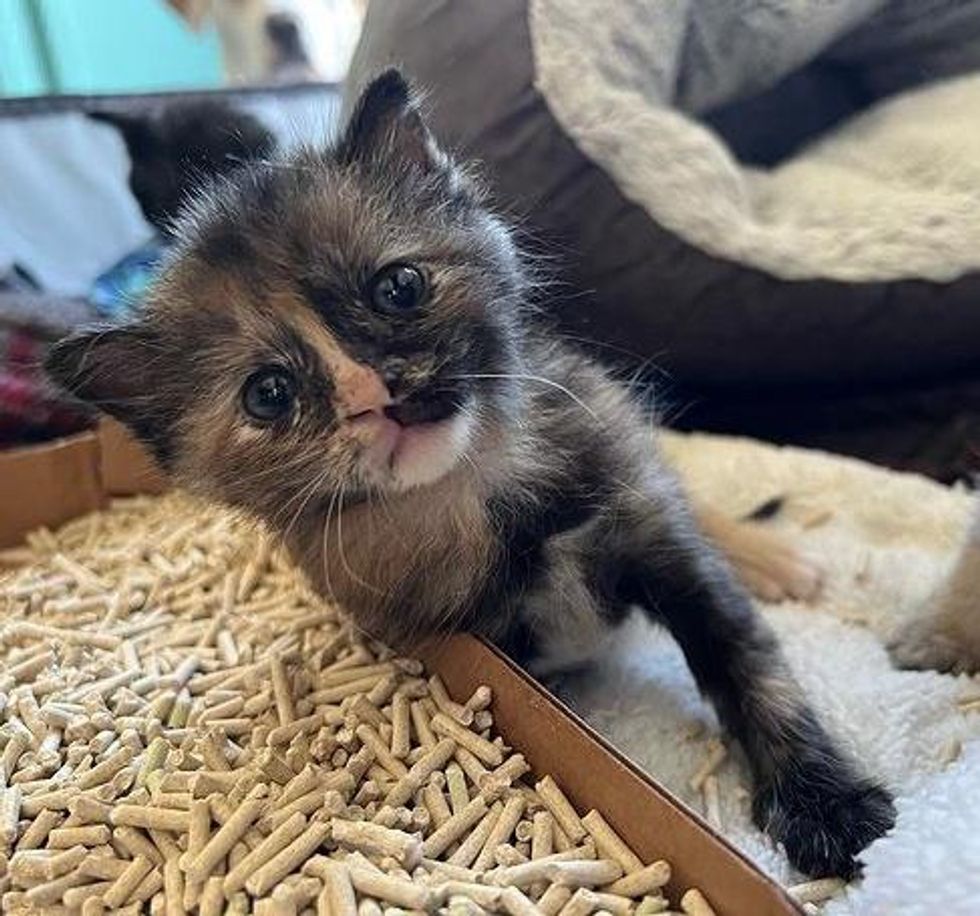 Related story: Kitten Decides to Be Raised by Dog After Being Found Alone, and Turns into Affectionate Fluff Ball