Home Cats Kitten Found in a Bush, Picks Puppy to Be Her Family and...

A kitten who was found in a bush, picked a puppy to be her family and decided to adopt him herself. 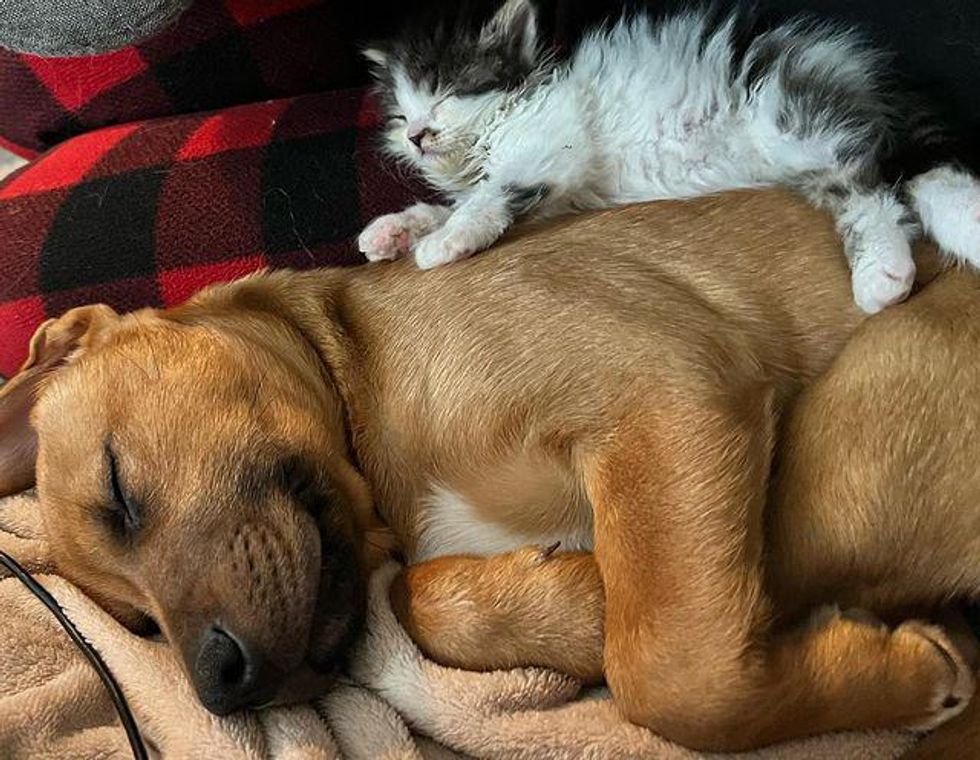 Grace the kitten and Ralfie the puppyPaula Montgomery

Paula Montgomery, a foster volunteer of Animal Welfare League of Arlington (AWLA), received a call about a lone kitten that had been found in a bush outside a church.

“She was found crying outside with her eyes matted shut, and completely smothered in fleas. She was anemic due to the fleas, as well as cold and hungry,” AWLA’s Kitten College Program shared.

The kitten was about three weeks old and in desperate need of foster care. Paula stepped up to help and named her Grace. “She got to my house around 10PM. I could feel the flea dirt as soon as I touched her and took her straight in for a bath,” Paula told Love Meow. 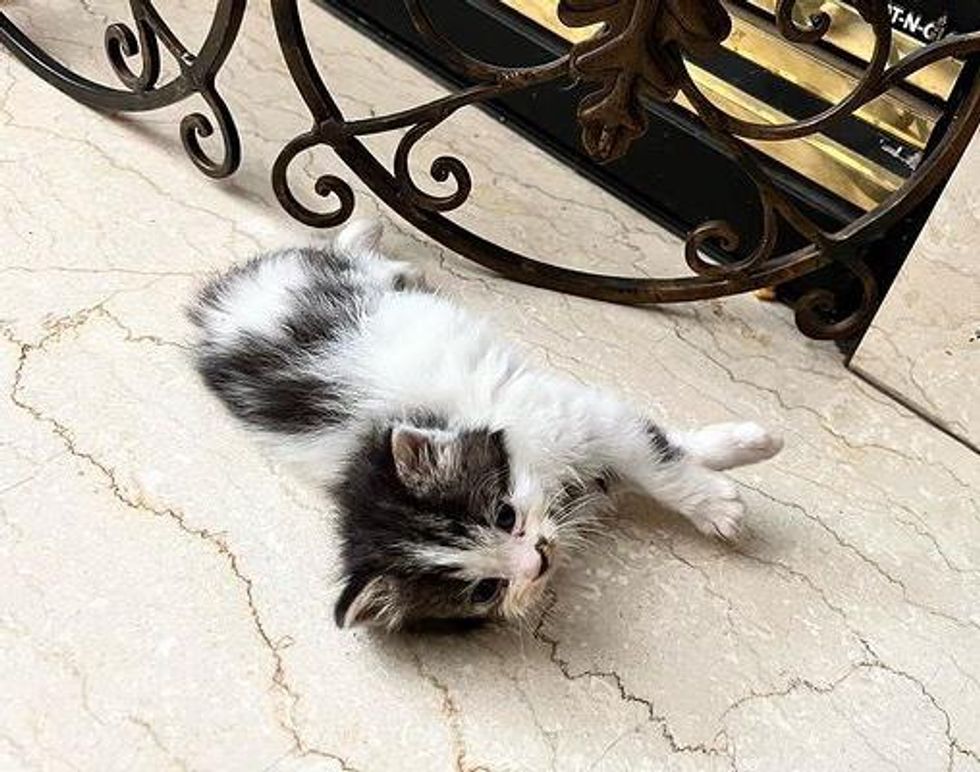 Grace was found in a bush outside all alonePaula Montgomery

Grace was in rough shape due to the flea infestation, so the first thing was to get her all cleaned up. After a much-needed bath and treatment, the kitten could finally breathe a sigh of relief and rest comfortably in a cozy incubator, making up for lost sleep.

“She was so exhausted that she was asleep before her head hit her pillow.” 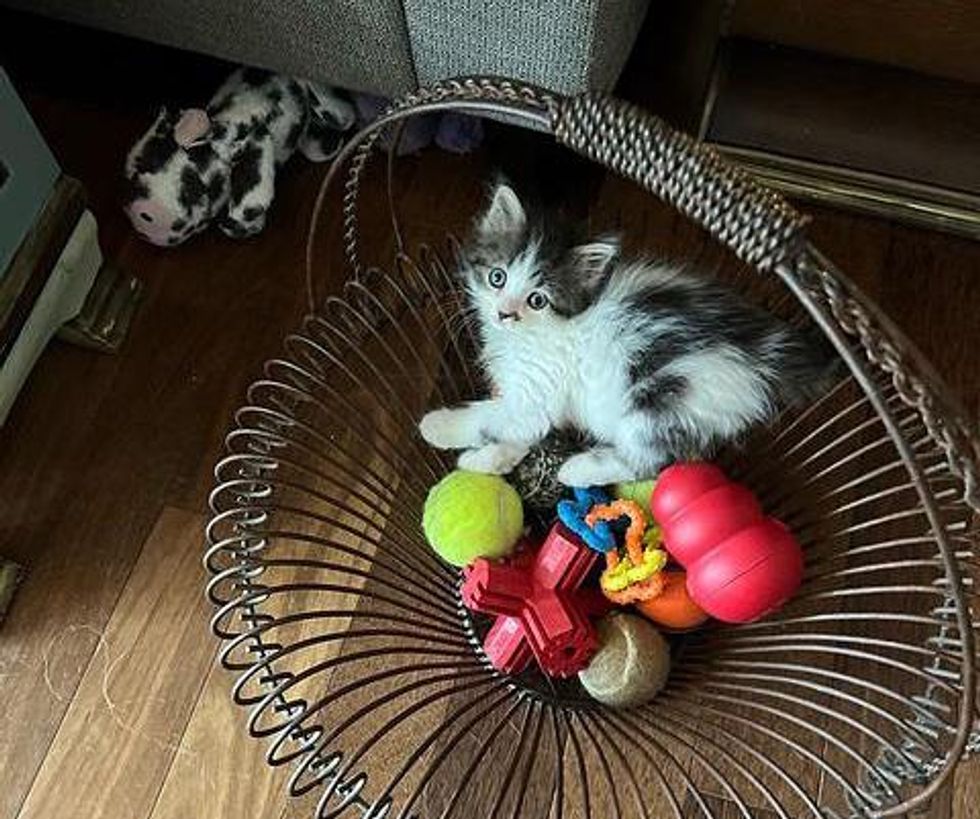 Grace was fed every three hours around the clock. Her appetite increased at each meal and her energy level also improved. “By her 7AM feeding, she made it clear that she did not need to be babied and did not need the incubator.”

The kitten bounced back with her new-found strength and vigor, and became eager for attention and play. Paula placed her in a basket lined with soft blankets and a heating pad, so Grace could stay close by during the work day. 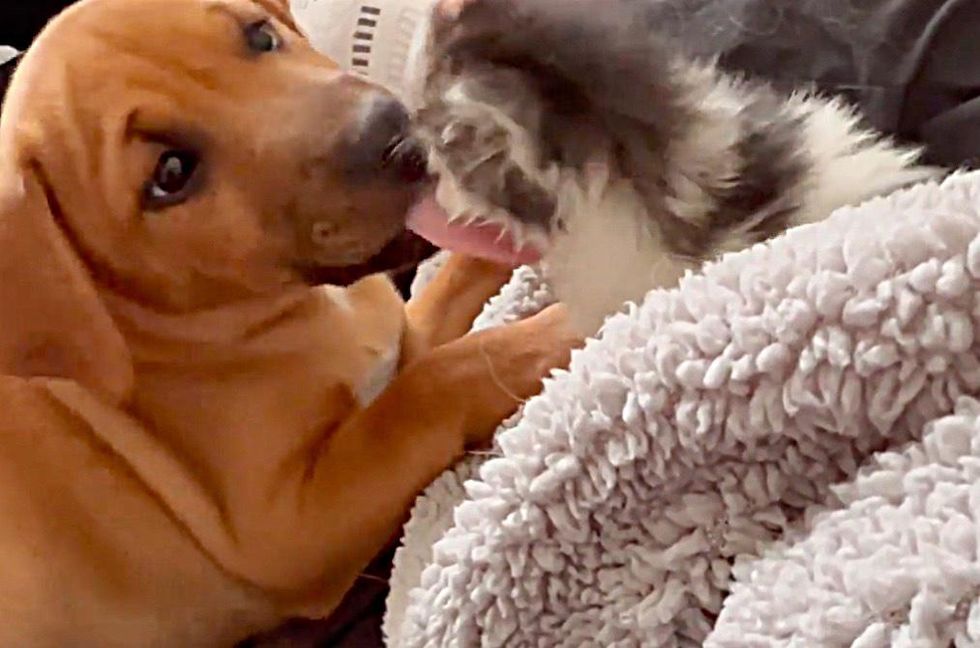 “I knew then that Grace was more powerful than she appeared,” Paula said.

At the same time, Paula had a foster puppy named Ralfie from a different rescue organization. The sweet pup caught wind of the newcomer when he picked up the squeaky meows with his big floppy ears. “He was so curious about Grace and the feeling was mutual.” 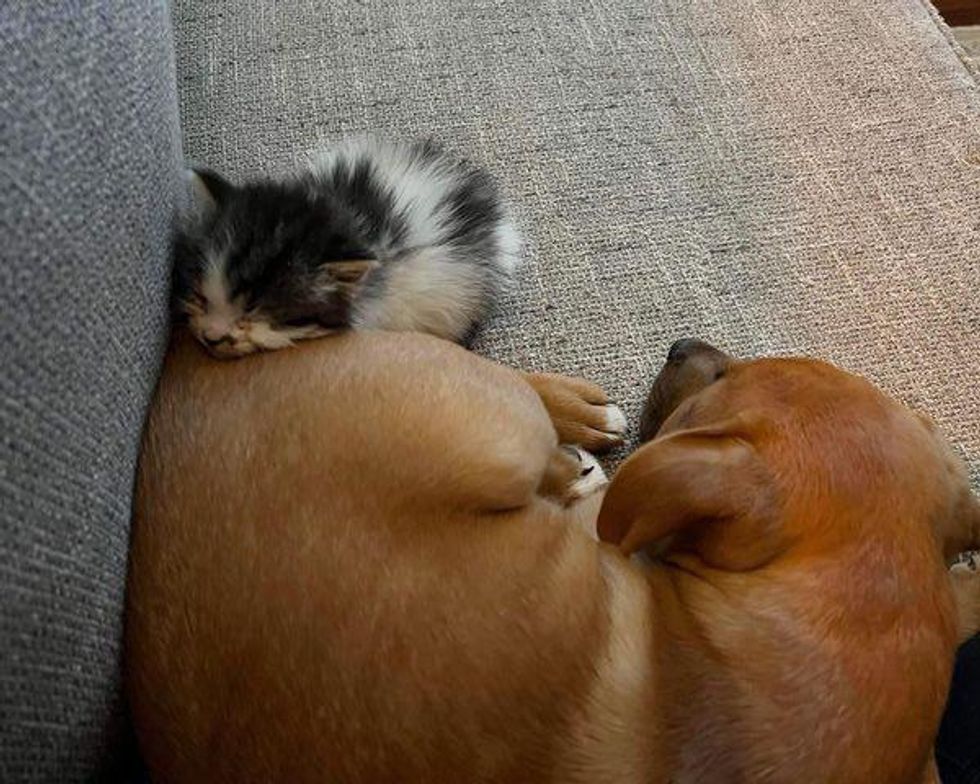 “Later that day I let Grace out to walk around a bit, and Ralfie was right there behind her, not getting too close. It was Grace that made the first move,” Paula told Love Meow.

Watch Grace and Ralfie in this cute video:

“She was still unstable in her feet but she ran right up to him like he was one of her siblings that she had become separated from.”

Ralfie who was much larger in size, gingerly nudged the kitten with his nose and started washing her face. Despite being at a tender age himself, Ralfie was incredibly gentle, patient, and nurturing to his feline friend. 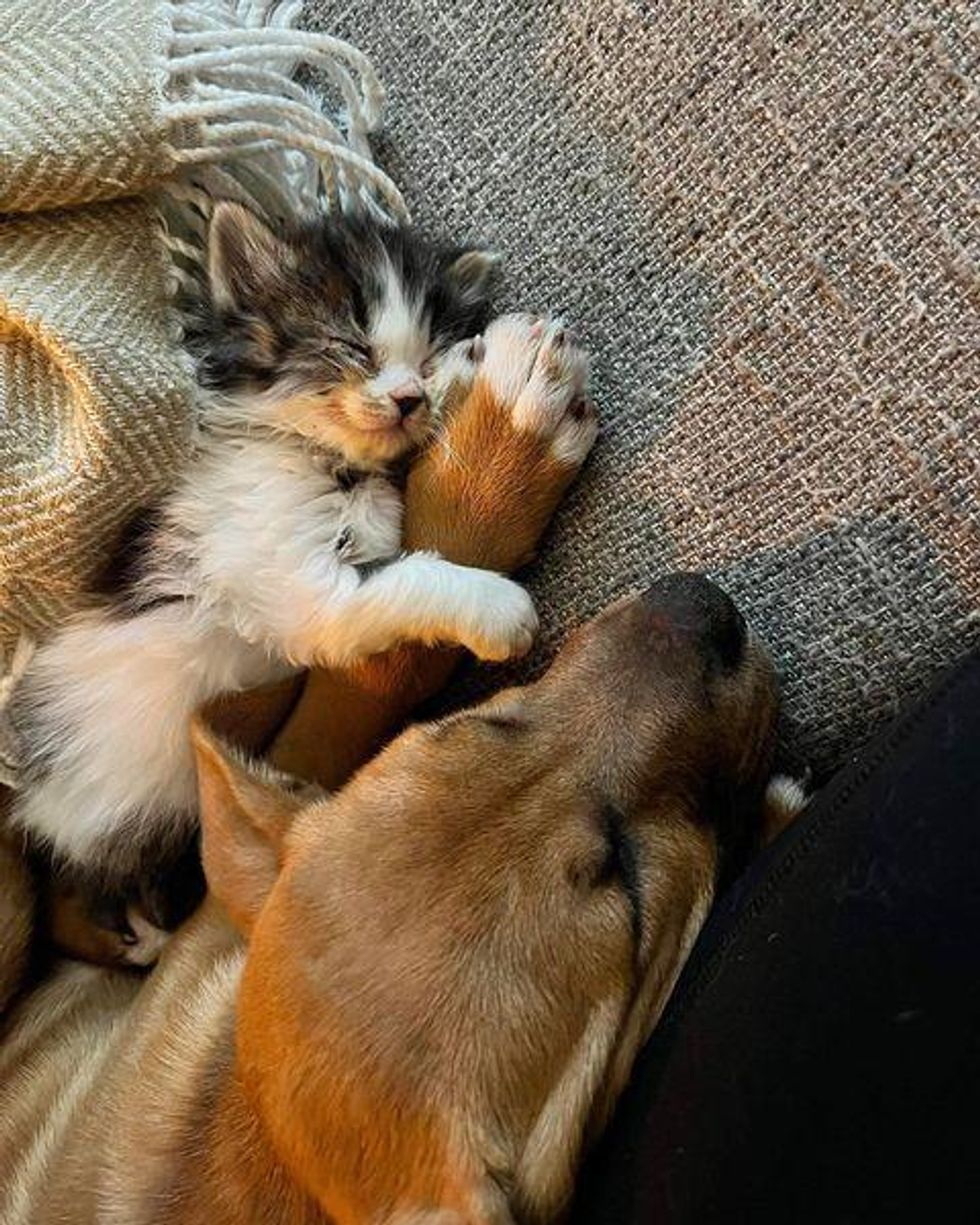 Grace adores Ralfie and the feeling is mutualPaula Montgomery

The two buddies instantly clicked as if they had always been siblings.

“From that point on there was no keeping them apart. I watched them closely, but he was so gentle. I do have to remind Grace that puppies’ noses are sensitive.” 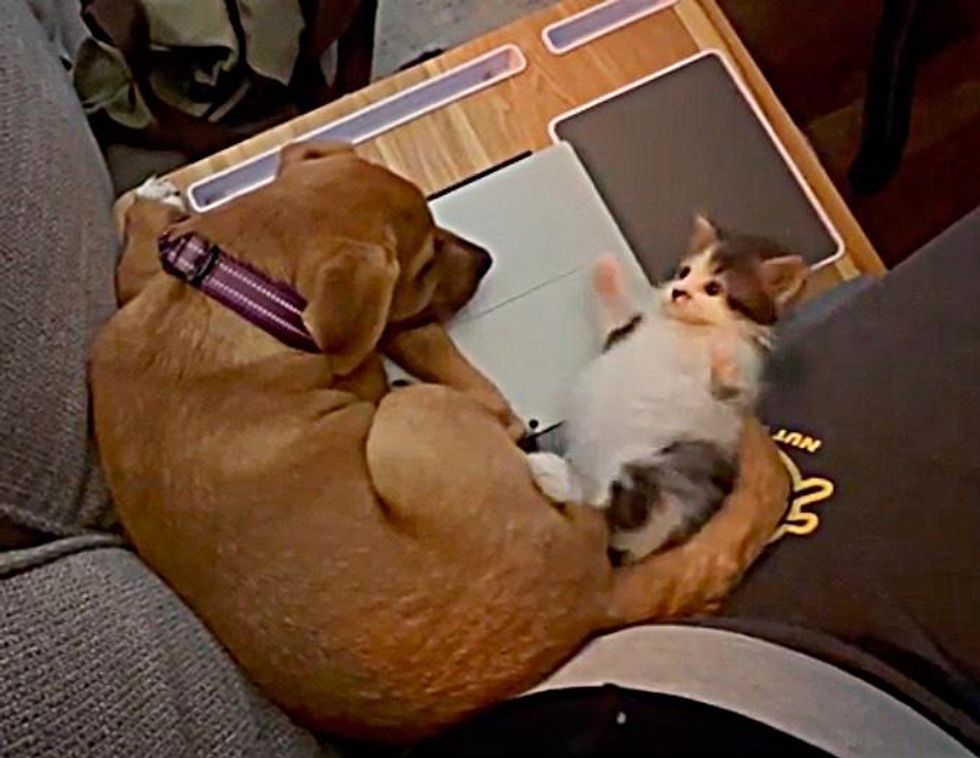 Ralfie seems to understand Grace and her needs, as he is a rescue who came from a similar path. The two have developed an adorable bond. They do everything together—playing, snuggling, grooming and napping.

Grace is still very small but what she lacks in size, she makes up for in sass. She will pounce on her buddy to initiate play, and nibble on his leg to show off her prowess. Perhaps, she thinks she is part canine herself. 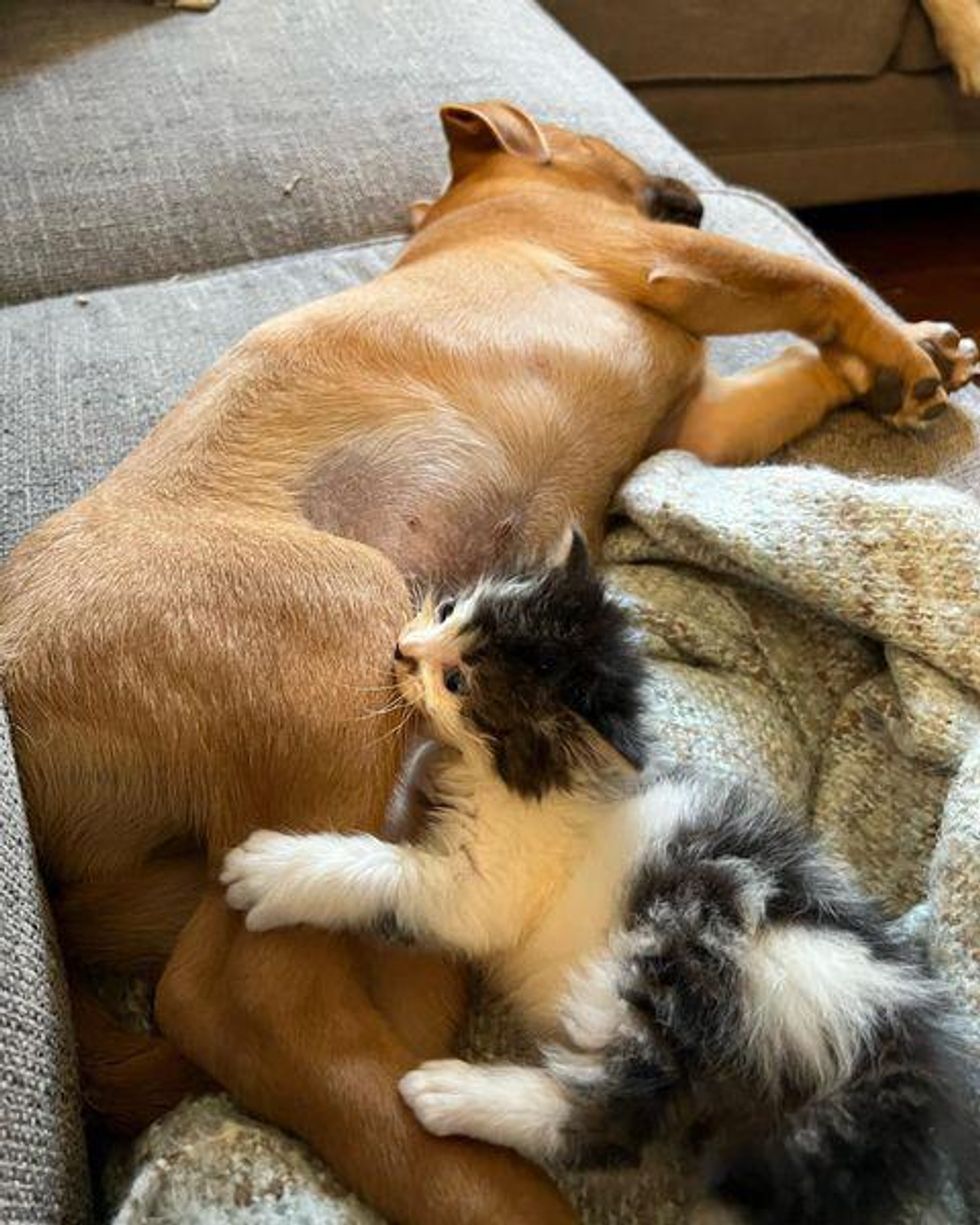 Ralfie is the happiest puppy when he is with Grace. The sweet-natured boy tolerates the kitten’s many antics and embraces her with his whole heart.

“While Grace still has some growing to do before she’s ready for adoption via AWLA, she would like to put in her request to adopt Ralfie herself,” AWLA’s Kitten College Program wrote. 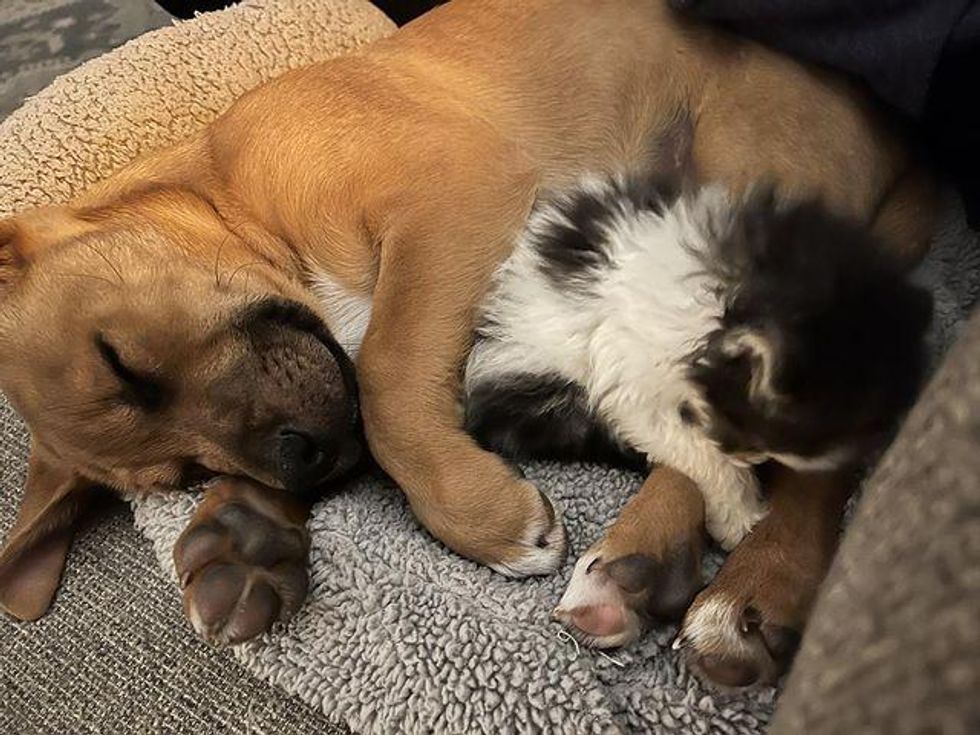 “These little souls were not intended to be alone. I was telling my little sister how much they loved each other and how they didn’t notice that they were a little different from each other,” Paula told Love Meow.

“She said, ‘when you are choosing your friends, you have to look under the fur.'” 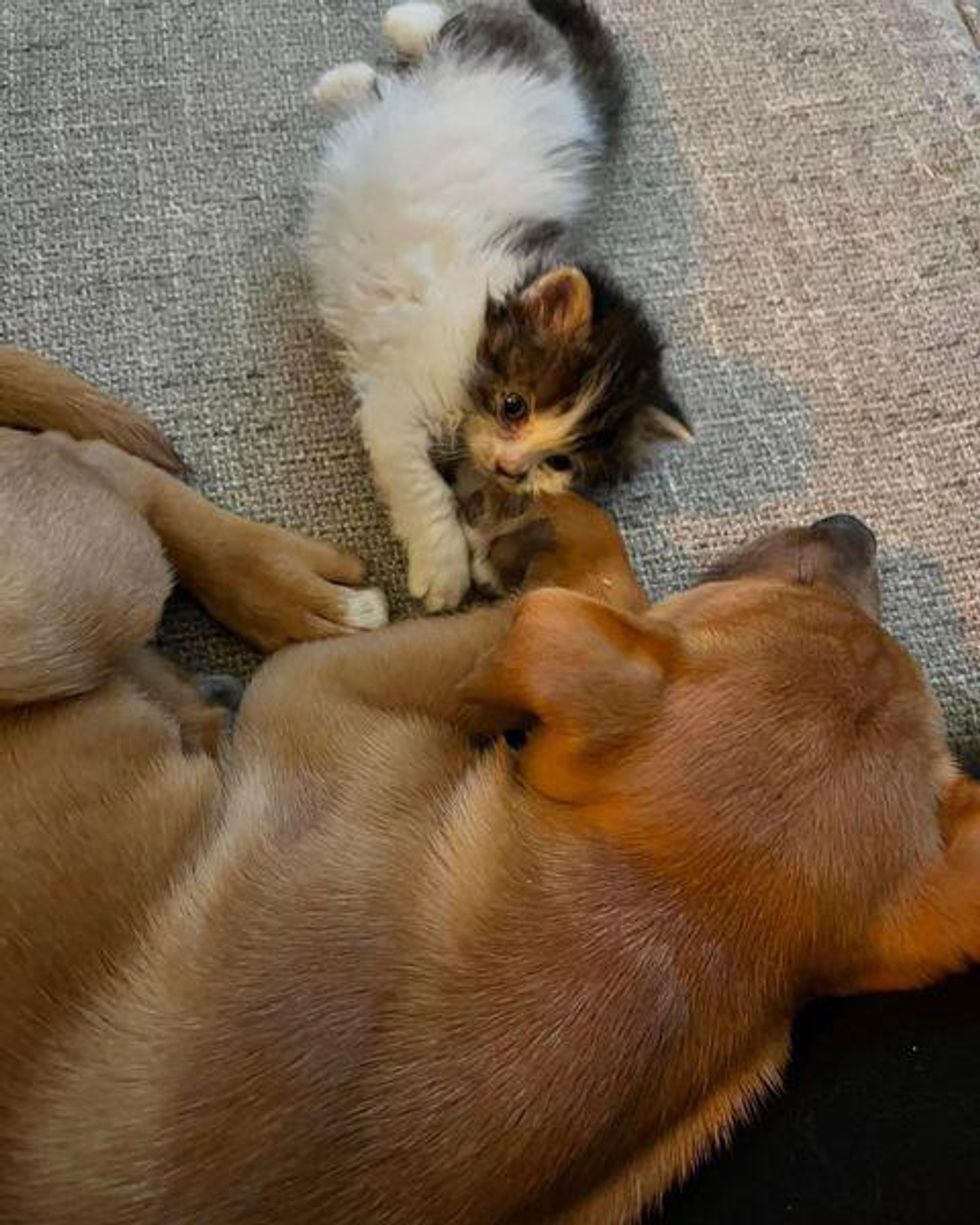 Related story: Kitten Who Is Done with Outdoor Life, Decides to Sit on the Driveway of a Home Until She is Taken in

8 Nights of Our Favorite Hanukkah Dog Toys, Treats and Sweaters

Dug Up at Dogster: December 2022 Dog Events and Dog Holidays