A cat kept her six kittens with her at a car yard until help arrived, so no one would be left behind.

Aurora the cat mom and her kittenBest Friends Felines

Early this month, Best Friends Felines (BFF, an animal rescue in Brisbane, AU) was contacted about a mother cat and her six kittens that had been found in an industrial bin at a car yard.

“It was unknown how long she was in there but she was very emaciated under her fluff,” Nikki of BFF shared with Love Meow. They immediately took the family of seven to the vet to be evaluated.

The cat mom, Aurora, was starving with no food source while trying to sustain six hungry mouths. She was with her kittens the entire time in the bin, nursing them and keeping them alive. 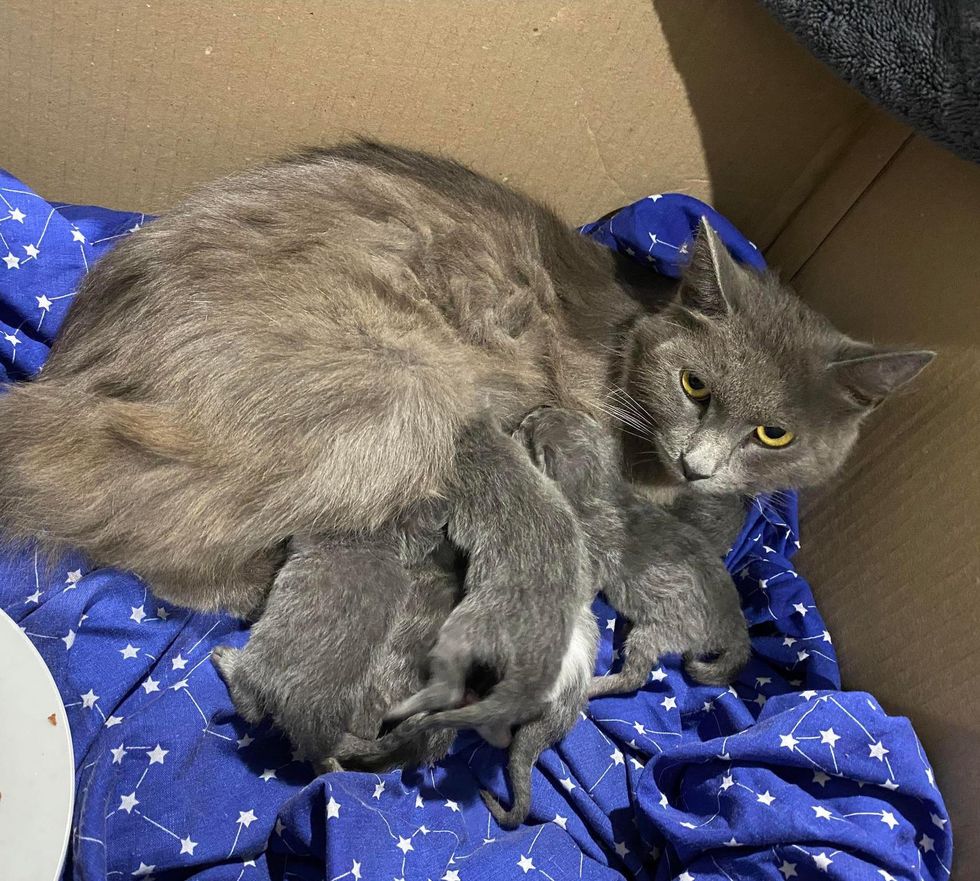 Aurora came into the rescue very fragile and exhausted. “While she was scarily thin, she came in unable to walk properly on her back legs. We wanted a full health check for her and her little ones.”

The momma cat was so pleased when she was given a full bowl of food, and scarfed it down as if there was no tomorrow. After a long ordeal, she could finally get some much-needed shut-eye knowing that her family was safe. 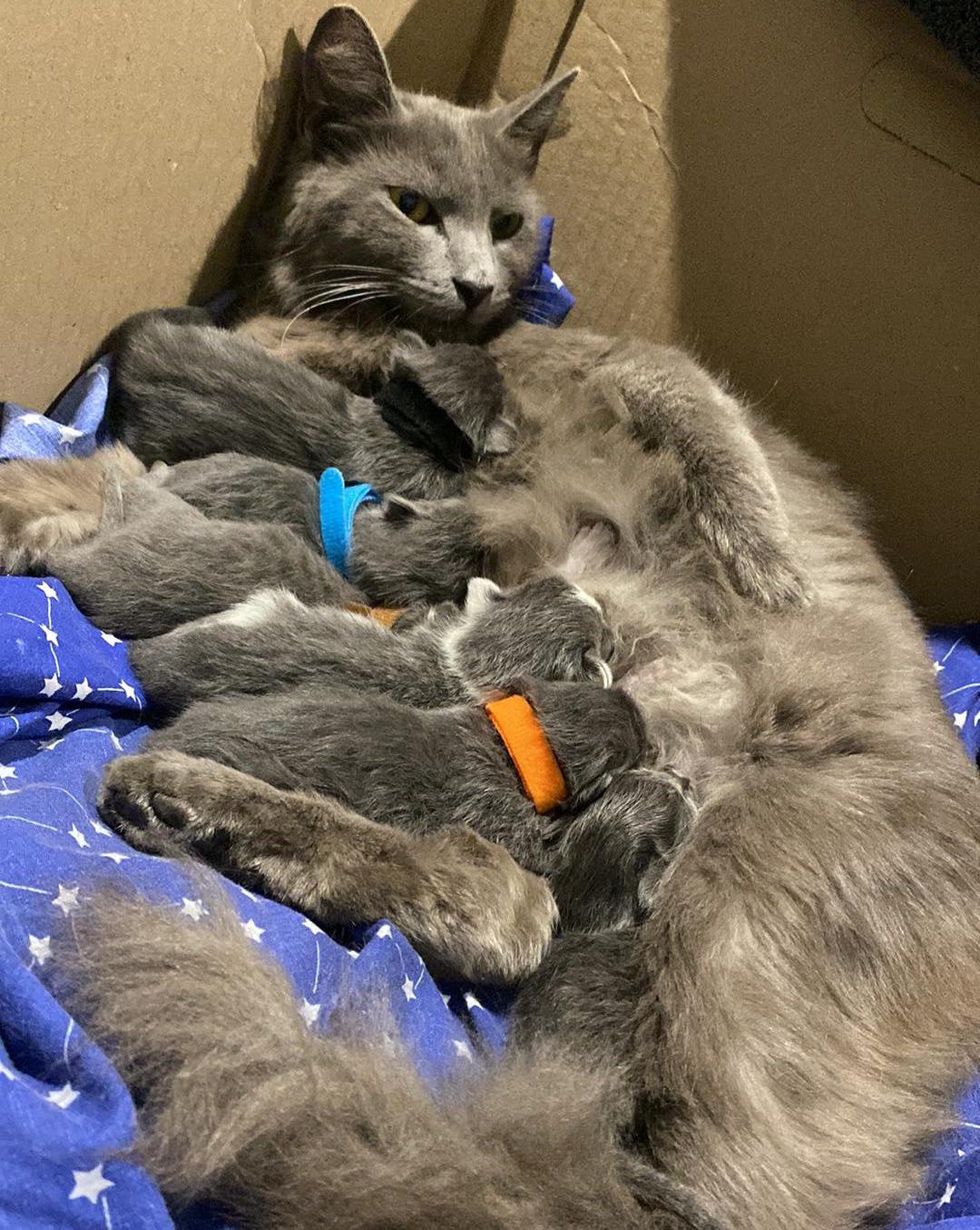 With some good food in her belly and a warm, comfy nest to rest in, Aurora regained strength in her legs. In the days that followed, she was strong enough to get up on all fours and started walking again.

Whenever a foster carer comes into the room to assist her, she is delighted for some attention and pets. 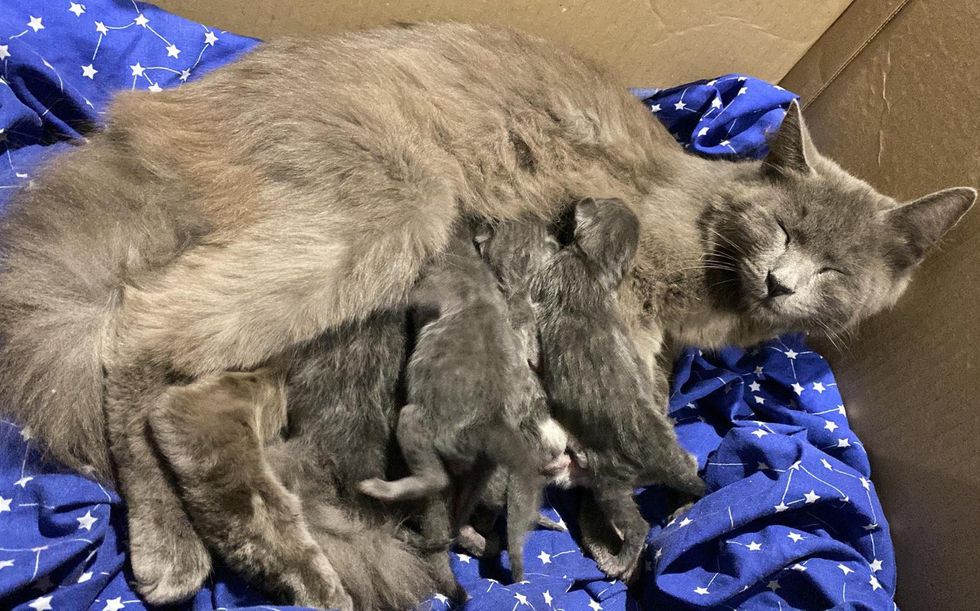 Aurora is so happy to have a roof over her head and all the food at her disposal. She is a wonderful mother to her litter of six, constantly making sure their bellies are full and coats are clean.

The kittens (five grey, one grey and white) got to open their eyes in the comfort of a safe home. As they grew bigger, they began to wriggle and started to find their feet. 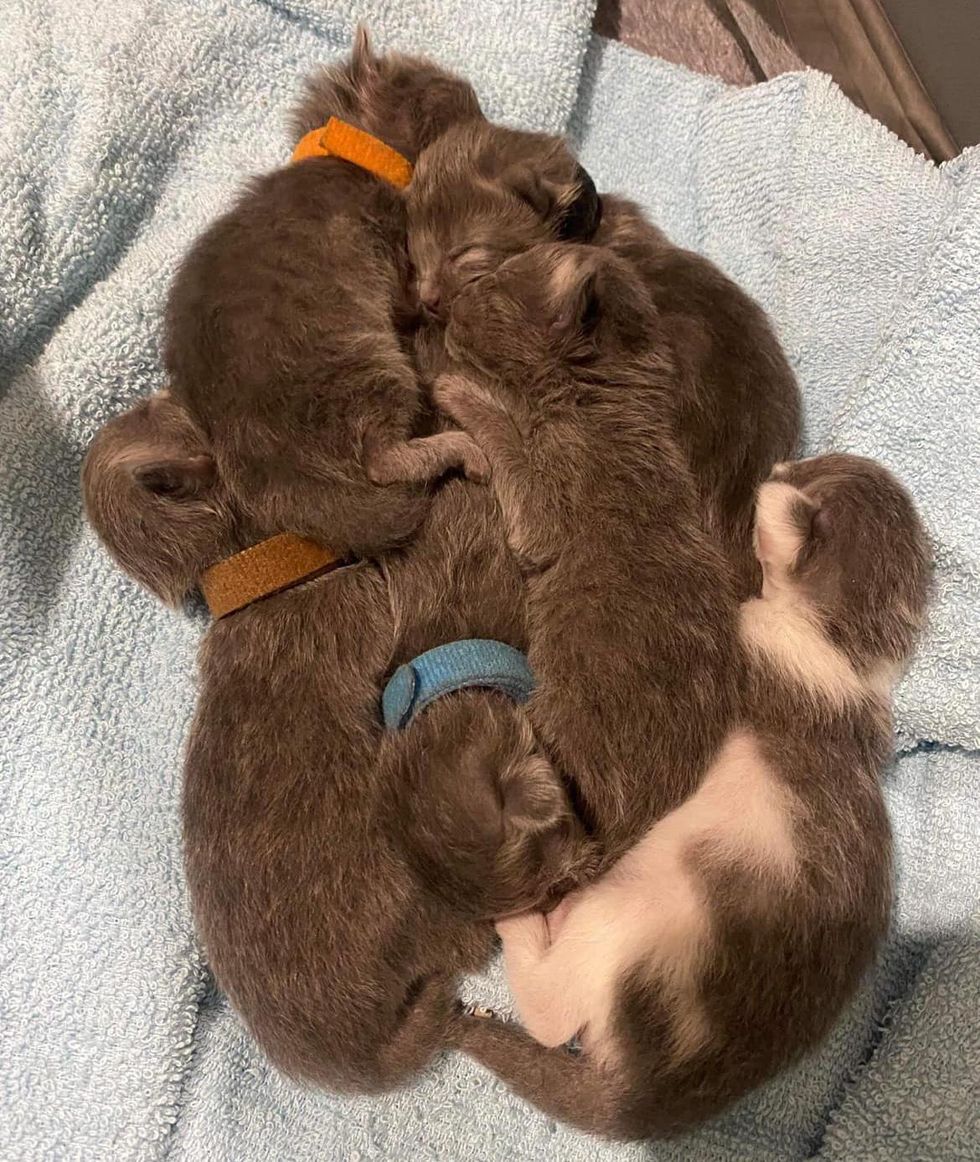 “Aurora has settled into the indoor human life really well, absolutely adoring attention and actively seeks out her humans for a cuddle. She is definitely benefiting from the good food she is getting, as her coat has become more silky already,” Nikki shared with Love Meow. 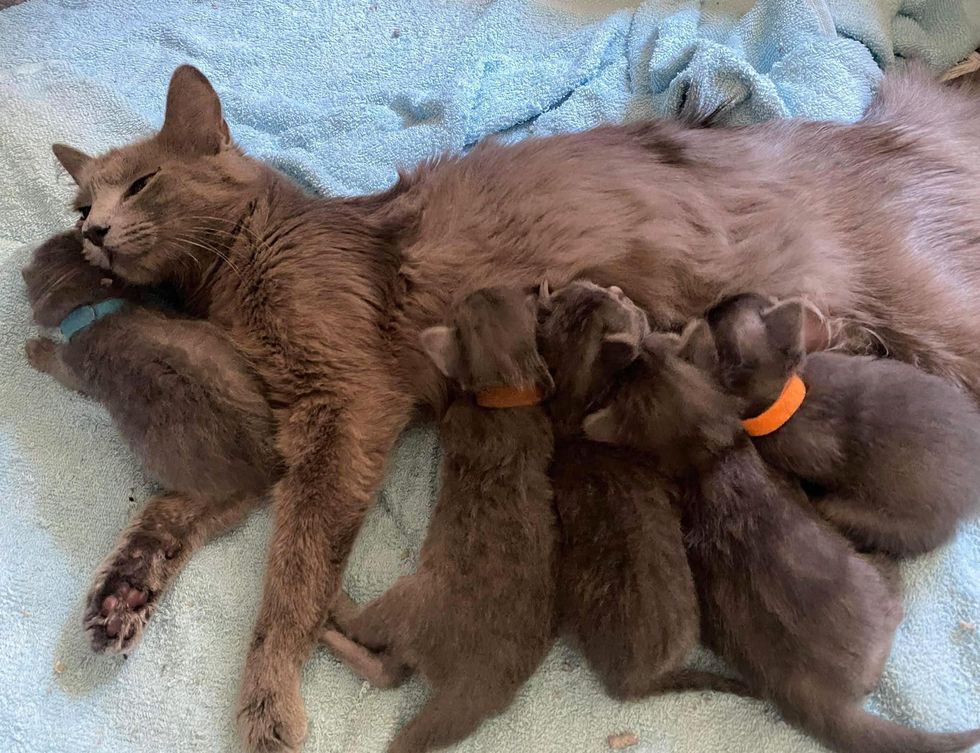 The kittens are now learning to walk and honing their gait under the supervision of their doting mom.

“Everyone is up and walking around, exploring their environment now. They have started playing with each other which is just the sweetest thing to see.” 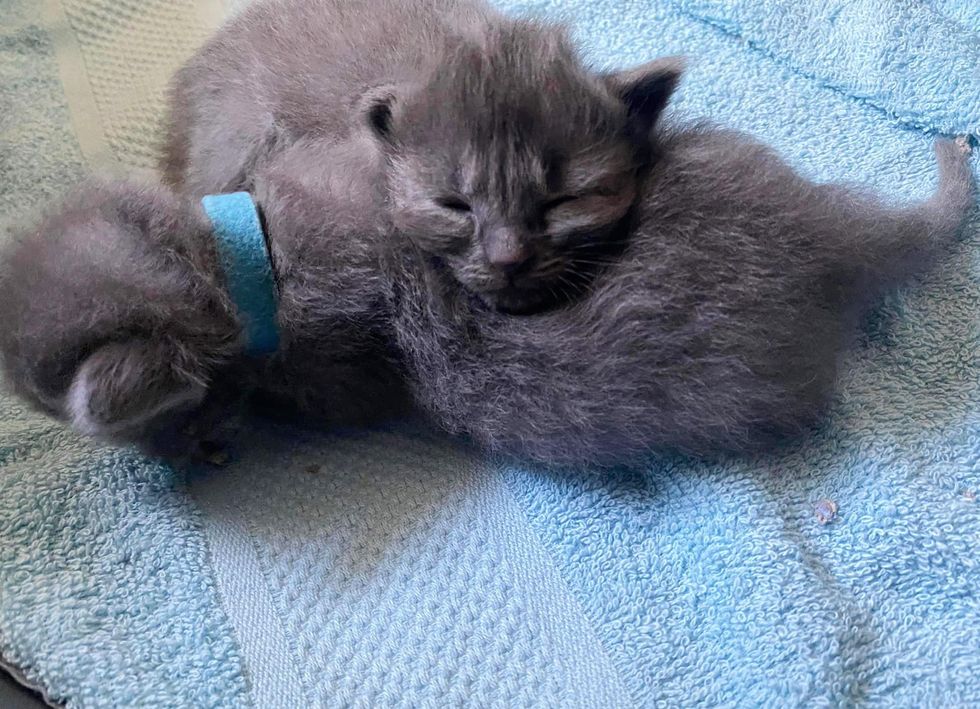 Aurora is finally taking more breaks away from her six and spending some one-on-one time with her people.

After surviving the outdoors with her kittens, the sweet cat can now enjoy being the center of attention she so deserves. 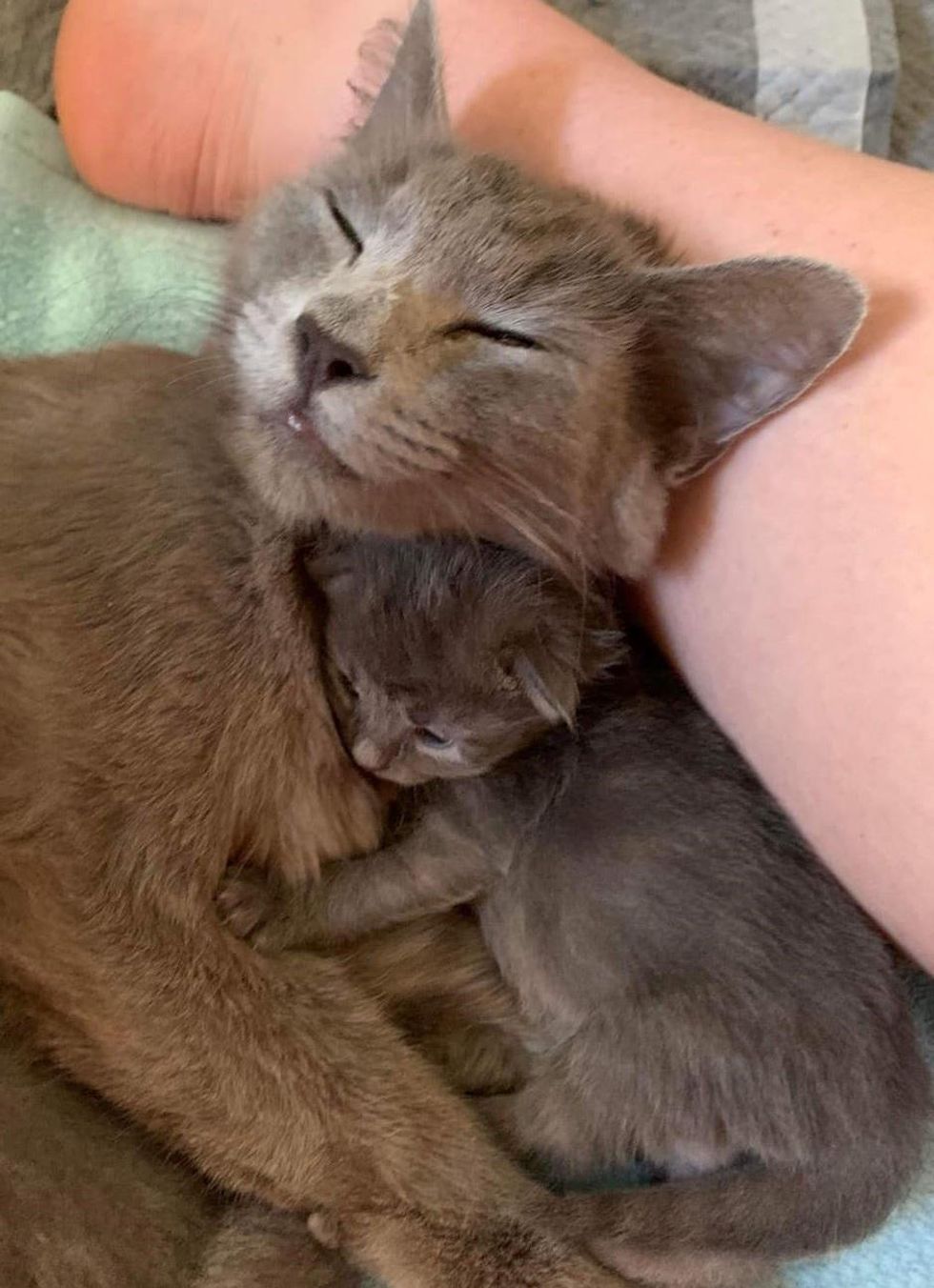 She greets her humans with the sweetest purrs and jumps into their bed for cuddles in the morning. Now, Aurora walks around the house with her tail held high without a care in the world.