Home Cats 4 Kittens Find Help Before It’s Too Late and Won’t Leave Each...

Four little kittens found help before it was too late—they kept each other close the entire time. 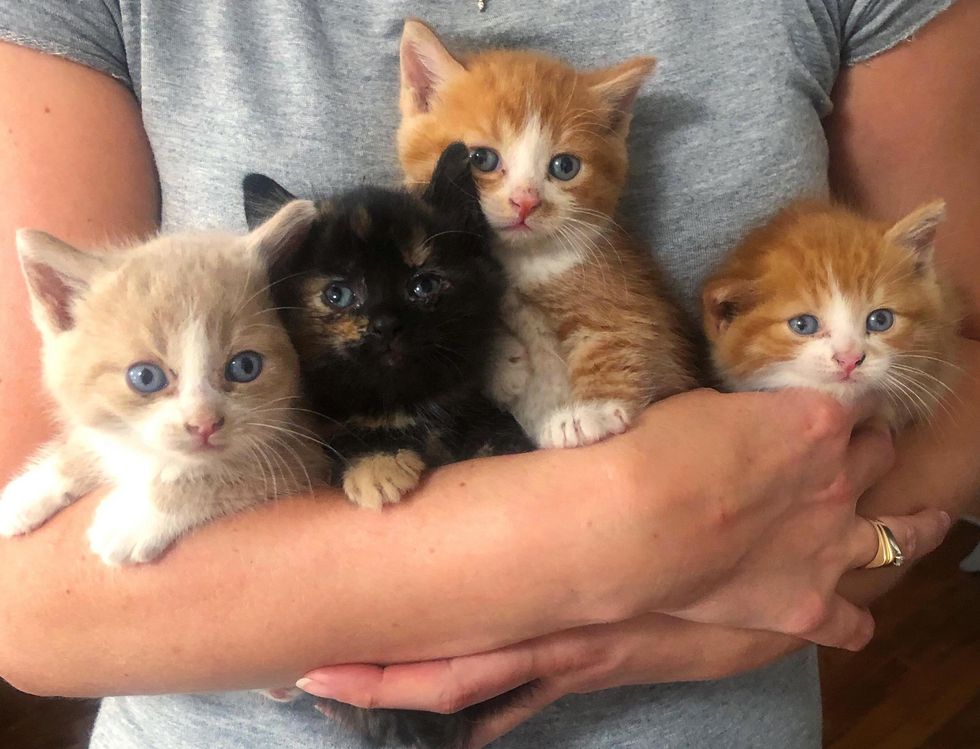 Four kittens rescued from a home outside of MontrealChatons Orphelins Montréal

A while ago, Chatons Orphelins Montréal, a cat rescue group in Canada, stepped in to help a large number of cats and kittens from a family outside of Montreal, as the family no longer wanted them.

Earlier this week, when the rescue was informed that four more kittens from the same family, needed to be saved, they sprang into action.

“The daughter of the family contacted us that her mother had taken in three unfixed cats again, and that the kittens had to go,” Celine Crom of the rescue, shared with Love Meow. 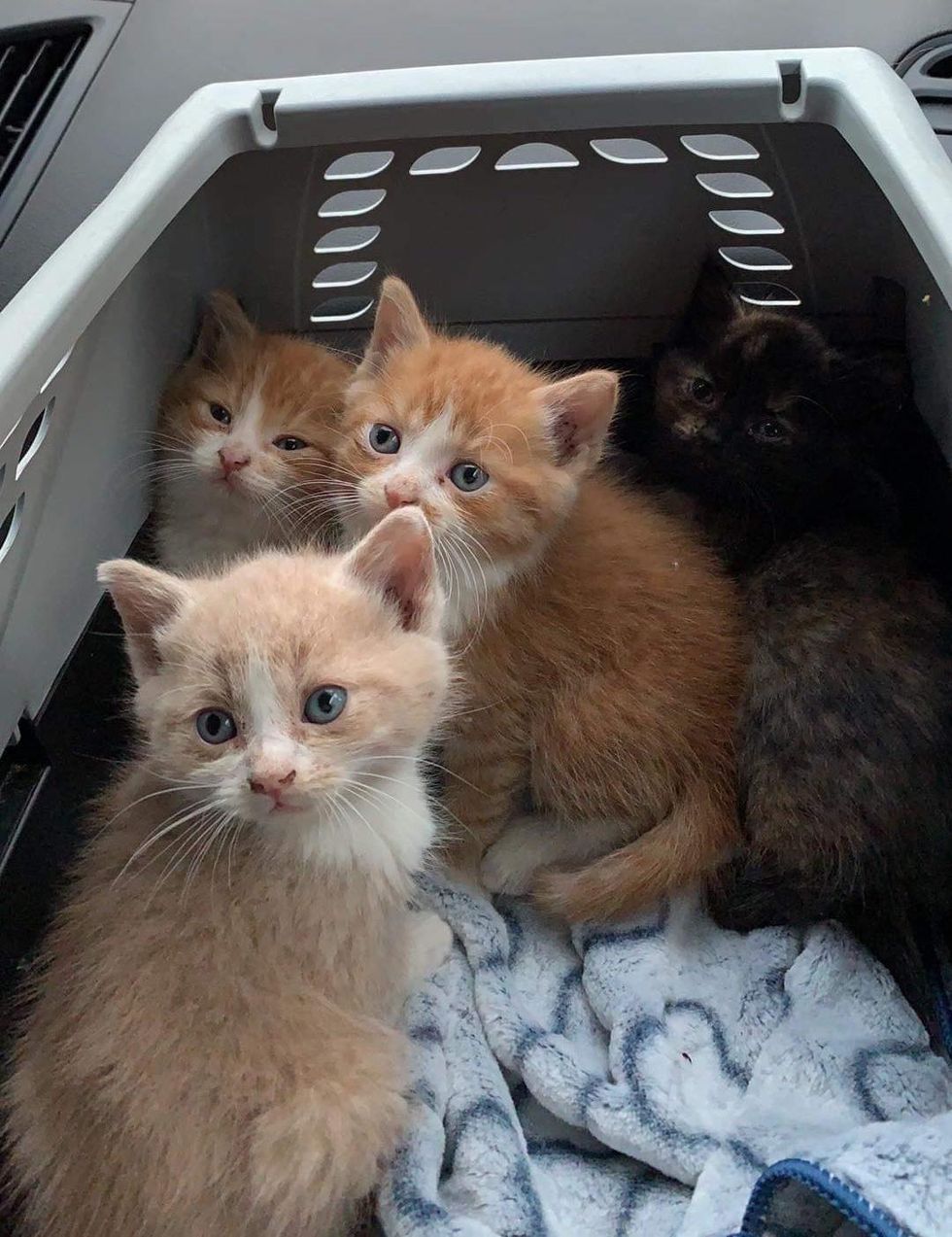 Miléna and Stefany, volunteers of the rescue, learned about the kittens’ plight and immediately rushed to the location. After one and a half hours of driving, they were able to get all four kittens to safety.

Since the family is keeping the adult cats, the rescue has offered to help spay and neuter them, so the cycle can be stopped. 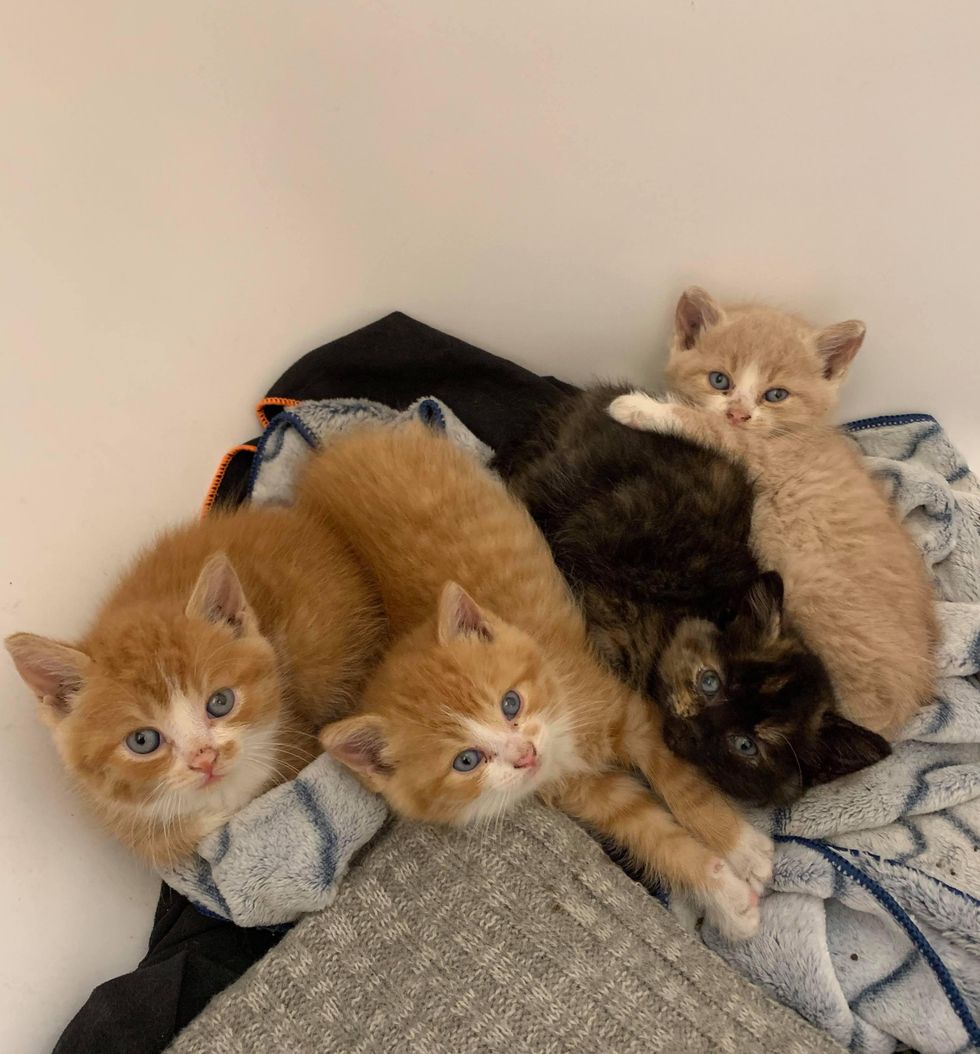 They continued cuddling at their foster homeChatons Orphelins Montréal

“The kittens were barely five weeks old when they arrived. There are three boys, Binx (orange), Spritz (orange), and Volt (beige), and one girl, Britt (tortie). They were underweight and needed to be treated for parasites,” Celine told Love Meow.

The feline siblings huddled up to each other during their ride to the rescue. The little tortie squeezed herself behind or amongst her siblings for extra “protection.” 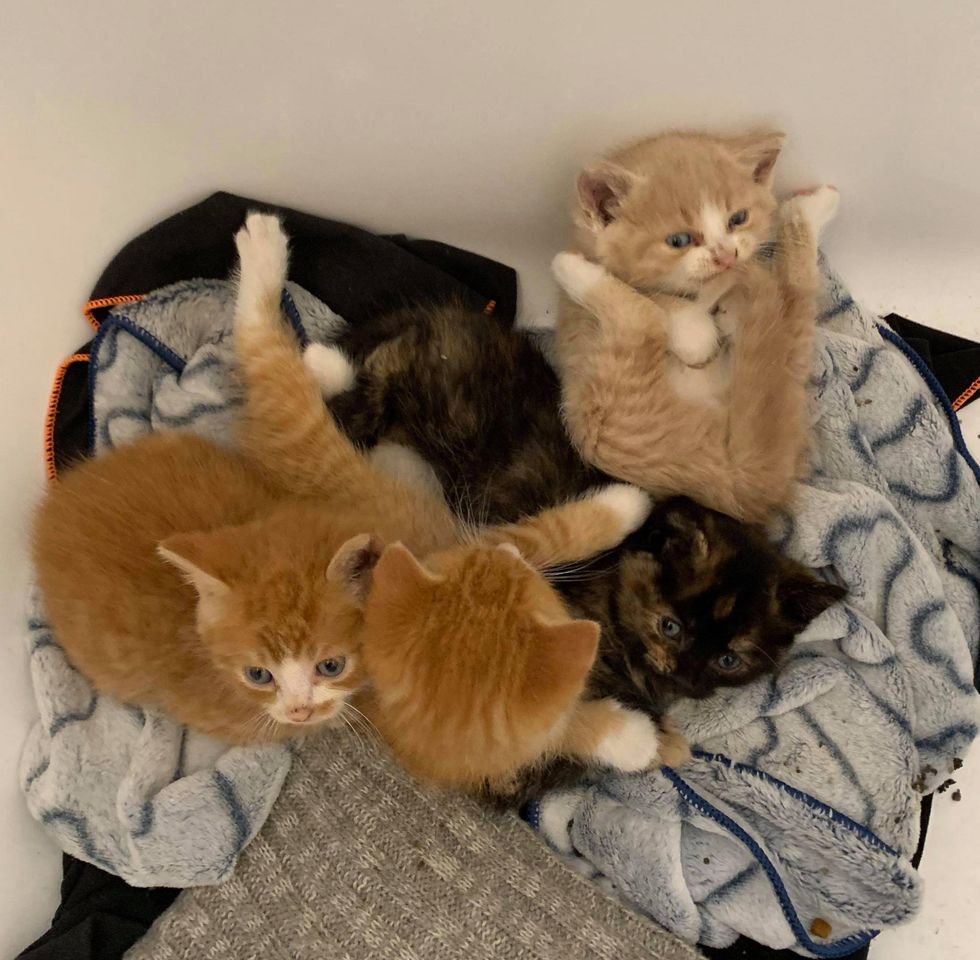 The kittens began to come out of their shellsChatons Orphelins Montréal

After a wellness check, they headed to their foster home, where they would learn to eat from a dish and socialize. Manon and Anais, foster volunteers of the rescue, got the kittens all cleaned up and started the weaning process.

Watch the four kittens in this cute video:

With comfortable new digs, the four tiny furballs quickly came out of their shells. They continued staying in a tight-knit clowder, as they ate together, napped in a cuddle puddle and rarely veered away from the group.

The kittens like to be cuddled together in a large embrace, so no one will be left behind. 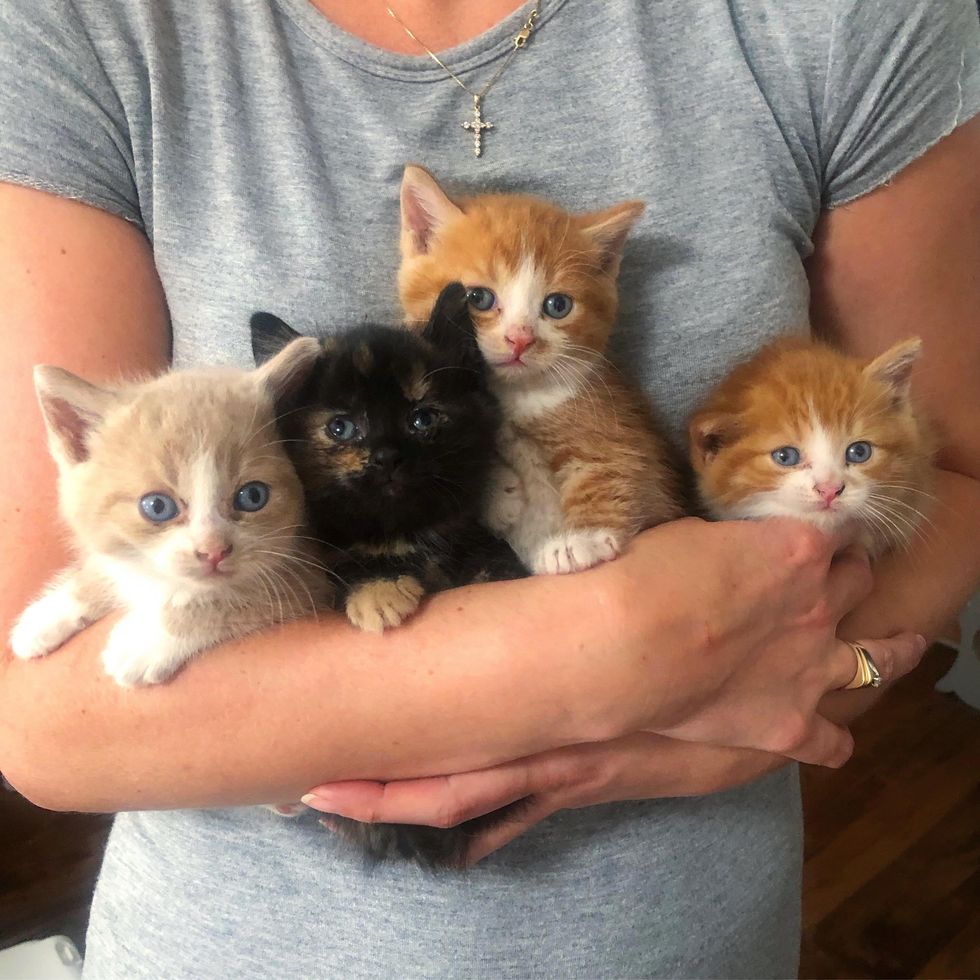 As the kittens realized that they were safe and in good hands, the braver ones from the litter started to seek affection from their human companions, and the others quickly followed suit.

The little ones have taken an interest in sitting on a warm lap or snuggling in their foster mom’s arms. They like to act as a unit, and you rarely see them wander off from their siblings. 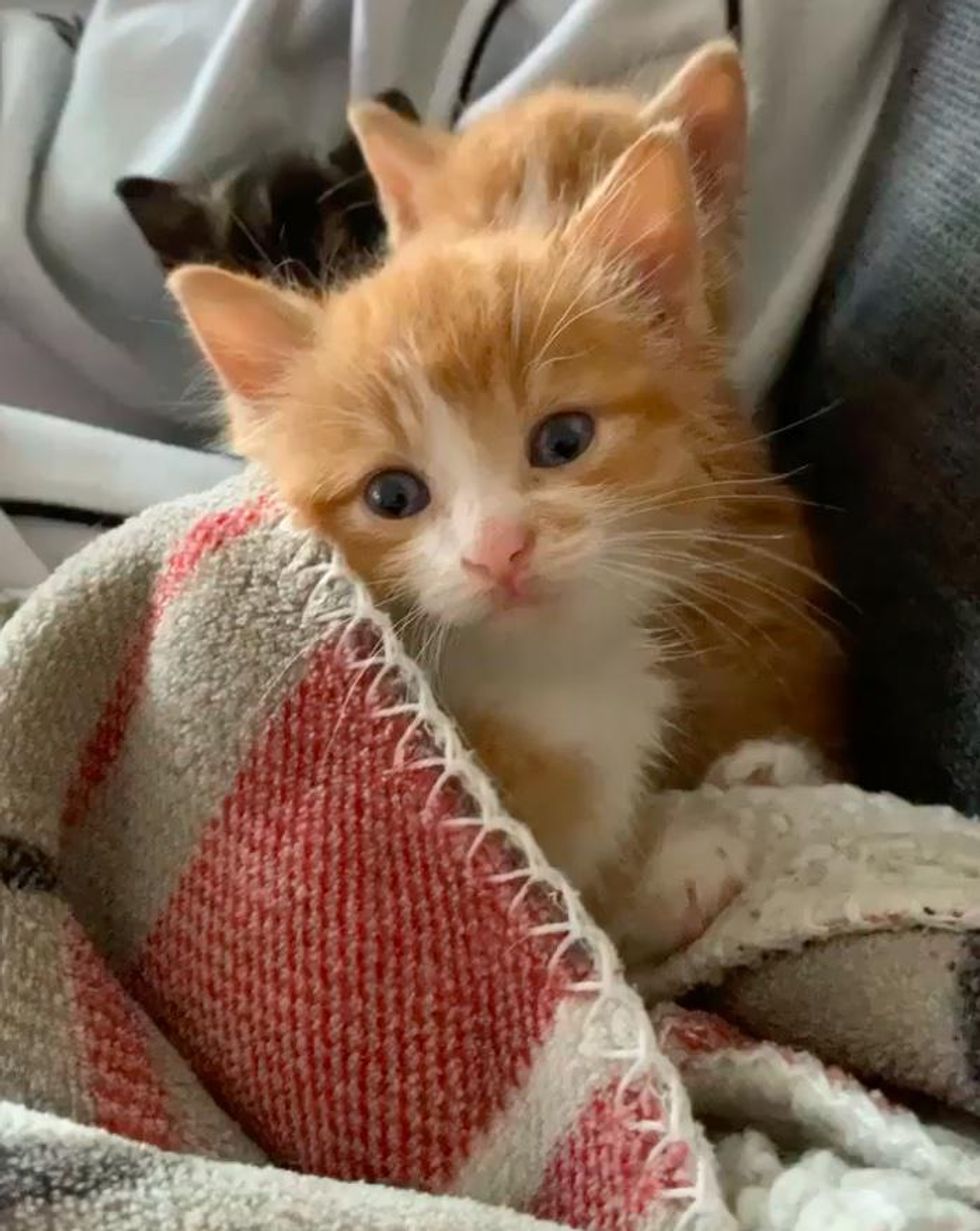 With medical care, good food, and lots of love, the quartet are thriving and filling their foster home with lots of purrs, squeaky meows, and feline entertainment.

When the kittens are big enough, they will be spayed/neutered, and find their own happily ever after. 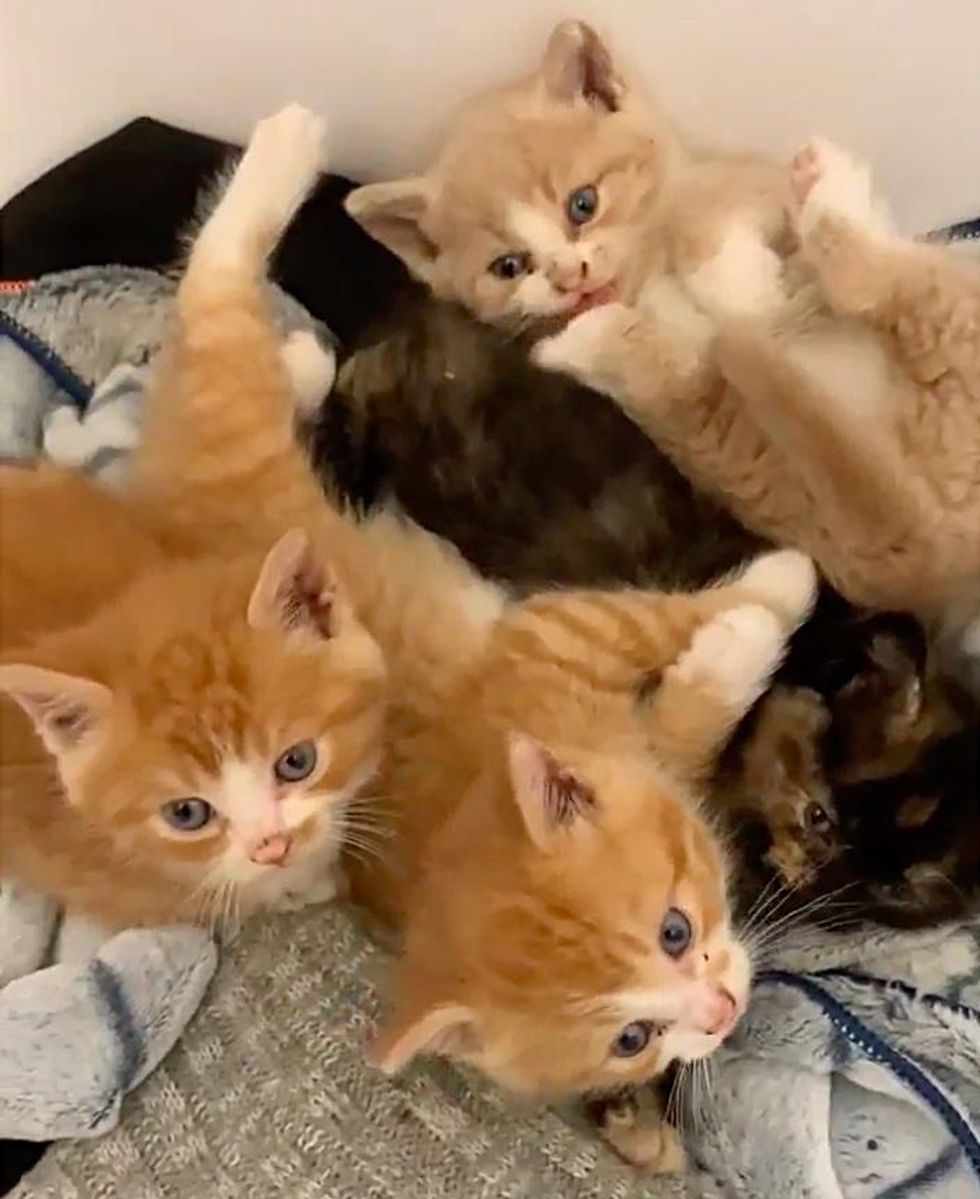